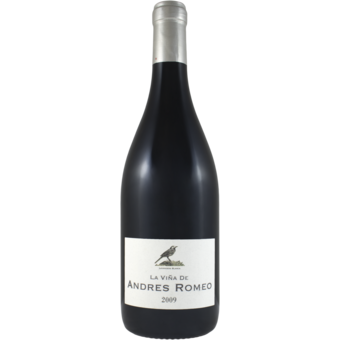 Winemaker Benjamin Romeo There is no doubt that Benjamin Romeo is a perfectionist when it comes to winemaking. He is both passionate in the bodega, and obsessive in the vineya...

"The 2009 La Vina de Andres Romeo is a pure Tempranillo cropped at 1kg per vine from the "La Liende" vineyard. It is aged for 17 months in 300-liter and 500-liter new French oak. The nose is very intense, with ripe, ebullient blueberry and cassis fruit, interlaced with kirsch and blood orange. The palate is full-bodied with ripe, sturdy tannins and a very controlled yet powerful finish of blackberry, bilberry, cedar and dark plum. This is a wine you experience rather than drink, and needs at least three years cellaring. Drink 2015-2028." Reviewed August, 2012

Winemaker Benjamin Romeo
There is no doubt that Benjamin Romeo is a perfectionist when it comes to winemaking. He is both passionate in the bodega, and obsessive in the vineyard. He worked as winemaker at Artadi between 1985 and 2000, and now has his own small project where he makes limited quantities of high quality, limited production Rioja, called, Contador, Cuvea del Contador, and La Vina de Andres, named after his father Andres. He introduced Predicador ("Preacher"), an entry-level cuvee in 2006, after a clamoring market couldn't gain access to his wines. He has recently added a white, Predicador Blanco, to his portfolio.

Situated in and around San Vicente de la Sonsierra, Benjamin has 7 hectares, half devoted to La Vina de Andres, and the other half divided between 20 plots averaging 130 square feet with vines up to 100 years old. He also acquired several caves or grottos, dating back to the 12th and 16th centuries. One such grotto situated in San Vicente de la Sonsierra, is under the bell tower, which is depicted on the Contador's label.

The attention to detail of these wines is exemplified by the hand selection of grapes to personally traveling to Extremadura to select the individual cork trees for the corks, incidentally the same cork supply that is used by Chateau Petrus. During the grape ripening time of the year, Benjamin visits the vineyard daily, many of which are bordered by wild flowers and herbs. He feels the aromatics of the herbs have an influence on the wine grapes.

Neal Martin, Robert Parker's Wine Advocate #202
One of the most memorable days in Rioja was spending an afternoon in the company of the inimitable Benjamin Romeo, the tour de force behind Bodega Contador. We flitted from one patch of twisted ancient vines to another, mainly around the medieval village of San Vincente, Romeo again and again propounding his mantra that terroir creates great wine. This involved one perilous drive through vegetation as thick as the Amazon until the 4x4 exited into a parcel of century-old, gnarly Tempranillo vines (upon which he mentioned that they were far more accessible on foot). Since leaving Artadi in 2000, he has gradually acquired around 80 parcels of old vine material, vinifying the fruit in a simple, modern, efficient winery, inaugurated in 2007, a facility that places functionality over aesthetic charms. Benjamin himself comes across as an intense, passionate, uncompromising winemaker, a little distant and apprehensive at first, but warming to someone who is patently interested in terroir. Bodega Contador is certainly a slick operation, fastidious down to the last detail, resulting in a set of sumptuous, silky smooth, curvaceous Rioja wines that are seductive, yet deserve considerable cellaring. Moving on to the 2010s, readers should note that these were bottled a week prior to my tasting them. Although Romeo's name is synonymous with "modern" Rioja, he told me that he wished to make a classical wine for his mother, whom he described as a "classical woman" and fancied a "change of scene."