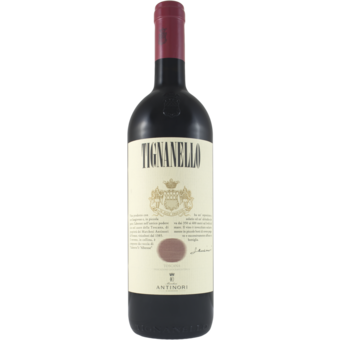 The Marchesi Antinori 2017 Tignanello (made with Sangiovese and smaller parts Cabernet Sauvignon and Cabernet Franc) is a dark, exuberant and inviting wine. I tasted my sample after a double decanting and was pleased by the profound nature of the wine and the immediate openness of the aromas. There is a symphony of dark fruit with black cherry, plum, spice and sweet tobacco. I am particularly attracted by a distant hint of medicinal or menthol herb that I also discovered in other wines with fruit from the Tignanello estate in 2017. There's a drying mineral note of crushed chalk as well. The heat and dryness of the vintage has added to the aromatic intensity of the wine (yields were reduced by a third), but the mouthfeel is carefully crafted to maintain its softness and smoothness. Fruit comes from a 57-hectare section of the Tenuta Tignanello from a vineyard that is located 390 meters above sea level with Alberese limestone rock and soils of marine origin. The wine is fermented in conical oak tanks and is aged up to 16 months in a combination of mostly French and some Hungarian oak, both new and neutral. Some 300,000 bottles were released in April 2020 after one year of bottle age.

The 2017 Tignanello is dense, exotic and flamboyant. Red berry fruit, cherries in liqueur, blood orange, wild flowers and sweet spice are front and center in this sumptuous, racy Tignanello that is likely to drink beautifully right out of the gate. The Antinori team has done a terrific job with the 2017, a year in which heat and dry weather took with them 30% of the production.