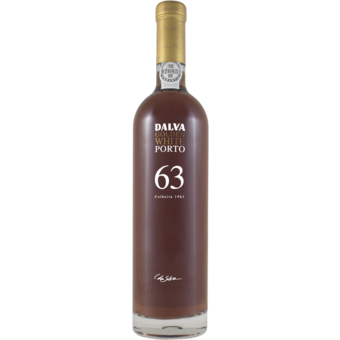 Please note, this product is a 500 mL bottle.

The 1963 Golden White Port (Dalva) is mostly a blend of Malvasia Fina, Viosinho and Rabigato, coming in at 130 grams per liter of residual sugar. This has been seen before, but this is the new 2017 bottling now in the USA. Not much has changed. This takes the gorgeous 1971 and adds some power, viscosity and intensity to it. It shows a little more complexity and it is burlier. It is often very much like a tawny in flavor. Taste this "white Colheita" blind and you may wonder if it is indeed white. It is still fresh and lifted, if not quite as bright and as youthful as the 1971. Overall, though, the added complexity seals the deal here, while the 1971 gets the nod for brightness. You slowly realize this does everything brilliantly. Which you prefer will be a matter of taste. I tend to emphasize complexity and my nod is to this, but I won't be surprised if some argue with me. The 1971 is pretty brilliant, too, if a bit more understated. This is another impressive White Port this issue from C. da Silva. Drink 2017-2040