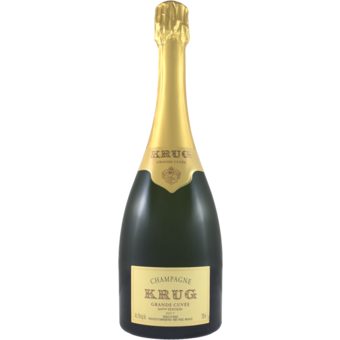 "This is all about balance and the integration of power and finesse, with finely honed acidity supporting flavors of quince paste, dried black cherry, spun honey and candied orange zest, while rich notes of roasted walnut, coffee liqueur and toasted cardamom resonate on the finish. Hard to stop sipping. Drink now through 2028. -AN" (11/13)

"Krug's NV Brut Grande Cuvée ID 112001 - disgorged already over the winter of 2011-2012 but then further aged before release - reinforces the belief that, thankfully, even wine lovers of modest means who occasionally splurge on Krug Grande Cuvée will be rewarded with a wine that need not fear comparison with this house’s more limited and far more expensive bottlings, nor for that matter with any other wines of Champagne. The harmonious juxtaposition of creaminess and lees enrichment with bright, juicy citricity and of expansive richness with levity is stunning. (Some of the textural allure of this cuvée might, I suspect, be traceable to its significant share of Pinot Meunier, particularly that of Festigny, in a side valley of the Marne's Left Bank.) Citrus zest notes segue seamlessly into the fine stream of CO2 without bitterness, while succulent white peach garlanded in lily-of-the-valley is laced with rich, subtly piquant nut oils and saliva-liberating salinity. Emerging suggestions of shitake and shrimp shell reduction compound the sense of capital-'U' umami in a vibrantly interactive and refreshing finish. A day after opening, this is even more vividly complex than it had been initially, with hints of fresh red raspberry lending an invigorating tang and sensation of berry seed-crunching that delivers strikingly harmonious counterpoint to both the luscious brightness of fruit and the nutty low-tones. Plan to follow this beauty for a dozen or more years. The team at Krug has long taken pains to emphasize that the task of assembling their Grande Cuvée from a hundred or more lots reflecting reserves of widely varying ages is mind-bogglingly complex. So is the result." (12/13)

95 John Gilman - View from the Cellar

"I love that every bottle of Grande Cuvée that has left the Krug cellars in Reims since 2011 now comes with an ID number on the back label, so that one can go to the Krug website and track down which release of this wine they are fortunate enough to have in their hands. This bottle is the new release of Grande Cuvée, which is primarily based on the 2005 vintage (as it was disgorged in the winter of 2011/2012 and would have spent six years on its lees prior to disgorgement and preparation for market), with, of course the usual addition of reserve wines in the blend dating back to 1990! The wine is utterly superb, offering up a beautifully complex nose of apple, wheat toast, a lovely, complex base of soil, fresh quince, citrus peel, minerals and a gently smoky topnote. On the palate the wine is deep, full-bodied, complex and very refined, with pinpoint bubbles, crisp, zesty acids, outstanding focus and balance and a very, very long finish that closes with great precision and grip. I know that many folks like to drink their Grande Cuvée right out of the blocks, but to my palate, this is still a baby and will really blossom if one can hold off gratification long enough to allow at least another four or five years of bottle age. As the notes below will attest, Krug Grande Cuvée is one of the greatest wines for the cellar produced in Champagne and there is emphatically no rush to start opening bottles of this wine when it is released, as the journey has just begun! A great wine. 2017-2040+." (08/13)

"Krug's Grand Cuvee is bright, tightly wound and gorgeous. Candied lemon, almonds, spices, savory herbs and dried pears all flesh out in a crystalline, layered Grand Cuvée loaded with class. I especially like the tension and weightlessness in this release. Constantly changing in the glass, the Grand Cuvée impresses for its exceptional balance and class. What a gorgeous Champagne this is. This release is a blend of wines from 1990 to 2005, disgorged in Fall 2012. ID 412043 - LLLMMF" (11/13)