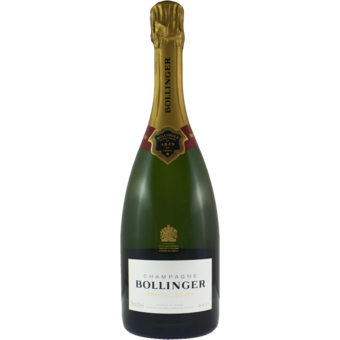 "This famous house was founded as Renaudin-Bollinger &amp; Cie. in 1829, by partners Jacques Bollinger and Paul-Joseph Renaudin. Its history can be traced back even further, ho...

"Lovely aromas and flavors of ripe black cherry and currant fruit, graphite, toast and candied Meyer lemon zest are set in this racy Champagne, with a refined, finely detailed mousse. The mouthwatering finish is long and spicy. Drink now through 2022."

91+ John Gilman - View from the Cellar

"While I am not certain that there are still different bottlings of this wine for different markets, it was certainly the policy of the Grandes Marques up until very recently to have slightly different versions of their non-vintage Bruts for various locales. I am guessing that the bottling of Bollinger 'Speciale Cuvée' for the American market still has a touch more dosage than the French bottling (the US almost always used to get sweeter versions of Brut than other markets), as this seemed to have its steely structural elements just a bit more buffered out of the blocks, and though the two wines are quite similar qualitatively, there is little doubt that for immediate drinking, this is the more pleasurable version than its French counterpart. The bouquet is excellent, offering up scents of apple, warm bread, a touch of orange zest, lovely minerality and a gentle topnote of smokiness. On the palate the wine is deep, full-bodied, crisp and beautifully balanced, with refined mousse, crisp acids and excellent length and grip on the complex and poised finish. To my palate, the dosage here is perfectly measured to seamlessly buffer the lovely acidity here and the wine just dances across the palate. High class non-vintage Brut. 2013-2025+." (08/13)

"An expressive and attractively layered nose offers up notes of brioche, yeast and baked apple scents. Much like the Brut Rosé the effervescence is prominent to the point of being foamy yet it is not aggressive as the bead is quite fine on the moderately complex, round and delicious flavors that deliver fine if not truly exceptional persistence on the intensely yeasty finish." (09/12)

"At every turn of flavor, barrel-fermented base wines add opulence to this Champagne with scents of apple wood, ginger and mustard seed balancing the youthful fruit. The flavors buzz with acidity and richness, a contrast of green apple with broader notes of baked apple; the texture is creamy, the finish completely clean. The wine’s structure is substantial enough to serve with sliced, seared beef filet at a holiday party." (12/13)

"This famous house was founded as Renaudin-Bollinger & Cie. in 1829, by partners Jacques Bollinger and Paul-Joseph Renaudin. Its history can be traced back even further, however, as Bollinger and Renaudin had a third partner, the Comte de Villermont, whose family had settled in the village of Cuis in 1650. In 1750, the de Villermont family purchased the estate in Aÿ that still houses the Bollinger offices today, at 16, rue Jules Lobet, and records show that the family owned vines and was already producing sparkling wines in the 18th century. The Bollinger and de Villermont families would later become further entwined, as Jacques Bollinger eventually married Louise-Charlotte de Villermont, the daughter of the Comte de Villermont, in 1837. Bollinger and Renaudin focused on export markets from the very beginning, selling wine in England as early as 1832, as well as in Germany, Russia and Scandinavia. In 1847, Bollinger bought out de Villermont’s shares, re-establishing Renaudin-Bollinger as a private company. Paul-Joseph Renaudin died in 1851, and in 1854 the business entered fully into the hands of Jacques Bollinger. Out of respect, however, he retained the name Renaudin-Bollinger & Cie., and this name would remain on the house’s labels all the way until the early 1960s. The house received a Royal Warrant from Queen Victoria in 1884, which would be renewed by successive monarchs all the way through the present day. Jacques Bollinger passed away in the same year, and the company was taken over first by his son Joseph, and later another son Georges. Joseph Jacques Marie Bollinger took over the house in 1918, following the death of his father Georges, and upon Jacques’s death in 1941, his widow Lily Bollinger took the helm, managing the company until 1971. Madame Bollinger would become a tremendously influential figure, directing Bollinger with astuteness, energy and charm, and it was she who established the character and reputation of the house in the modern day. Upon her retirement, her nephew Claude d’Hautefeuille took charge, and after him another nephew, Christian Bizot, who would establish the house’s famous Charter of Ethics and Quality. Ghislain de Montgolfier, a great-great-grandson of Jacques Bollinger, took charge of the house from 1994 to 2008, and today, Jérôme Philipon is managing director, while Mathieu Kauffmann (pictured), who has been with the house since 2001, is Bollinger’s chef de cave. Bollinger’s 160 hectares of vines provide for roughly two-thirds of the house’s needs, which ensures a certain consistency in both style and quality. The current production is roughly 2.5 million bottles a year, and while the new winery in Aÿ can comfortably accommodate a production of up to three million bottles, the house isn’t seeking to increase production for the time being, as they feel that maintaining the high percentage of estate-grown grapes is crucial to their success. Fermentation is carried out either in stainless steel tanks or in oak barrels between 200 and 400 liters in size, and whether tank or barrel is used depends on the individual wine, as Bollinger vinifies a wide array of villages and parcels separately. However, all wines used for the prestige cuvée La Grande Année are vinified in wood, as are all wines destined for storage as reserves. According to the house, the wines made in stainless steel always go through malolactic, while the wines in wood are left to do as they like—some barrels will go through malo while some barrels will not. In certain vintages, such as 1995 and 1988, the malo simply doesn’t start, and there is nothing done to encourage it. Bollinger stores its reserve wines in magnum bottles, an extremely labor-intensive process that few houses are willing to undertake, and certainly no others on this scale. Between 70,000 and 80,000 magnums of wine are put aside each year, and there is a total stock of about 500,000 magnums in the reserve cellar, comprising perhaps ten different villages and ten different vintages. The wine is bottled with a touch of yeast and sugar to give it just a little sparkle (1.5 bars of pressure), as a means to keep it fresher for a longer period of time, and all of the magnums are bottled with natural cork." -Peter Liem, Champagne Guide