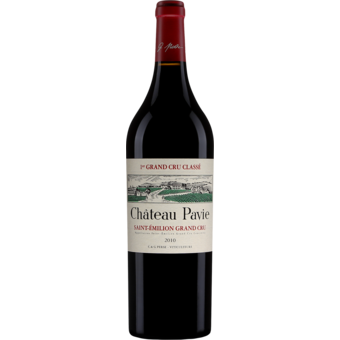 "What fun, excitement and joy it will be to compare the four perfect wines Perse has made in 2005, 2009, 2010 and, of course, the 2000, in 25 or so years. This wine is truly profound Bordeaux. Everything is in place – remarkable concentration and a beautiful nose of cedar and ripe blackcurrant and blackberry with some kirsch and spice box in the background. Lavishly rich, with slightly more structure and delineation than the more Rabelaisian 2009, this wine does show some serious tannins in the finish, and comes across as incredibly youthful. Of course, it's five years old, but it tastes more like a just-bottled barrel sample than a 2010. In any event, this wine is set for a long, long life and should be forgotten for at least another decade. Consume it over the following 75 or more years.

Pavie is widely acclaimed as one of Bordeaux’s greatest terroirs, of largely limestone and clay soils. Brilliantly situated with a sunny, southern exposure and exceptional drainage, Pavie potentially rivals nearby Ausone, the oldest and possibly the most famous estate in Bordeaux. Pavie’s other nearby neighbors include, Pavie-Macquin and Troplong-Mondot to the north, Larcis-Ducasse to the southeast and La Gaffelière and Saint-Georges Côte Pavie to the west. Until 1978, previous owners rarely produced great wine, but of course that all changed with the acquisition of the 92-acre, single vineyard by Chantal and Gérard Perse. In short, they dramatically raised the quality. Currently, the vineyard is planted with 60% Merlot, 25% Cabernet Franc and 15% Cabernet Sauvignon, but the actual blend for each vintage tends to possess slightly higher amounts of Merlot. A perfectionist, owner Gérard Perse is flexible with the percentage of new oak, as well as how long the wine is aged in cask. Great vintages can get 100% new oak and spend up to 32 months in barrel. Lesser years are bottled after 18 months and see at least 30% less new oak. There is no fining or filtration. The resulting wine has been considered one of the superstars of Bordeaux since 1978. "

The 2010 Château Pavie is straight-up magical, and while it matches the 2000, 2005, 2009, and 2015, it has a style all its own. (It’s probably most similar to the 2005, yet even more tannic and backward.) Checking in as blend of 70% Merlot, 20% Cabernet Franc, and the rest Cabernet Sauvignon from tiny yields of 26 hectoliters per hectare, it’s still ruby/plum-colored and has a powerful, inward bouquet of blackcurrants, smoked earth, graphite, chocolate, and white truffle. Deep, powerful, and massive on the palate, yet also incredibly delineated and focused, it’s shed just a touch of the baby fat it had in its youth and still needs another 4-5 years to hit prime time. Given its depth of fruit, flawless balance, and both purity and freshness, it’s going to be a 75- to 100-year wine.

This is really exceptional with such freshness, firmness and focus. Full body, incredibly tight tannins and a lengthy finish. Such power and elegance at the same time. The beginning of a new era of Pavie.

A brick house, still rather tight, with loads of apple wood and juniper flavors holding the core of red currant, blackberry and bitter plum fruit in check. Offers ample grip through the finish, with a mouthwatering chalk, graphite and tobacco spine. A huge wine that hasn't budged and probably won't for some time.—Non-blind Pavie vertical (March 2017). Best from 2025 through 2050. 7,083 cases made. — JM

This is accomplished and enjoyable, starting to come into its own at ten years old, and very much infused with the limestone impact of its soils. One of my favourite Pavies that scrapes along the palate in that way that just weakens my knees. A style of vintage that suits this property, where the acidity provides a natural break but doesn't detract from the fruit and concentration. It is exerting its power gently and imperceptibly, turning the screw until the tannins are barring your way at the close of play. Brilliant stuff. (Jane Anson, tasted 29 Jan, 2020)