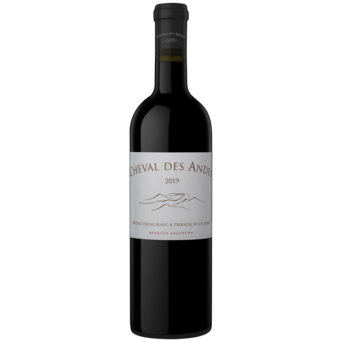 The 2019 Cheval des Andes had a more reductive vinification and élevage, making the wine a bit shy and in need of time to open up, as one of their objectives was to make it more age-worthy. Another objective is to get to a 50/50 blend of Malbec and Cabernet Sauvignon, which they achieved in this vintage for the first time, going back to the initial character of the wine that was the idea of Argentinean winemaker Roberto de la Mota; so, they are closing the circle and going back to the initial idea, with more implication from the Cheval Blanc team. This is the first vintage fully under the charge of the new French winemaker, Gerald Gabillet, who fermented by plot, isolating some specific parts of the vineyard, like the borders where you tend to get higher yields because of the irrigation. It matured in 225- and 400-liter oak barrels and in oak vats. They used more barrels and vats from Stockinger, which they like and rotate; the wine spends an average of 13 to 14 months in oak, but some lots get 11 months and others get 16. 2019 was a mild vintage, cooler than 2017 and warmer than 2018, with rain at the right time, which helped to avoid hydric stress, and without extremes (which they had in 2020 with three weeks of extreme heat). The wine is young and tender and a bit oaky, which Gerald attributed to the reductiveness; it's ripe without excess, with around 14.2% alcohol, mellow acidity and velvety tannins. There's more Cabernet here, so the aromatic expression can be something between 2017 and 2018, but Cabernet marks the palate a lot and makes the wine more age-worthy, as it provides the structure and length that the Malbec lacks. So, the wine might be less accessible when young and should develop slowly in bottle. It's tasty and supple and has the ingredients and the balance for what they are aiming for. In the following vintages, they follow this path, and Gabillet feels that having more precision allows the wines to reflect the differences between vintages better. They keep producing around 100,000 bottles. It was bottled in late January 2021. The way they want to describe the wine is the Argentinean expression of Cheval Blanc. And I can only agree.

The 2019 Cheval des Andes is a 50/50 blend of Malbec and Cabernet Sauvignon from Las Compuertas and Paraje Altamira, Mendoza. The 2019 was 40% aged in 225-liter barrels, 40% in 500-liter barrels and 20% in foudres. It’s red with violet flecks in the glass. It has a fresh nose of plum and blackcurrant accompanied by hints of white pepper, mint and violets over a bed of cedar and sandalwood. On the palate, the feel is finely grained with a leaner, more agile flow than in previous years, while the freshness brings plenty of energy before the lengthy finish of fruit and country herb aromas.

A refined but spicy Cheval, showing charcoal, blueberries, wild herbs, lavender and hints of bacon and cedar. Medium to full body with extremely fine tannins that get dialed into the fruit with violet, spices and sweet blue fruit at the end. Long and subtle. Drink or hold.