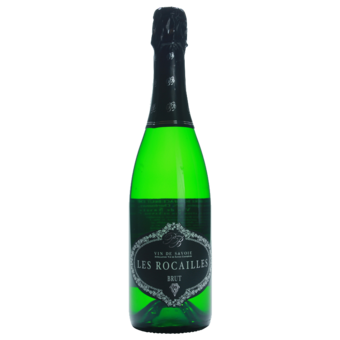 " The non-vintage Les Rocailles Brut de Savoie is a low alcohol (7-9%) blend of 60% Jacquere, 20% Chardonnay and 20% Altesse. (Put it in a blind tasting and see if anyone can guess its composition.) Aromas of apple skins, spring flowers, lemon zest and a delicate hint of pear emerge from this wonderfully effervescent, dry, crisp, light-bodied, featherweight style of wine. Drink this remarkable effort over the next 9-12 months." (08/12)

Winemaker:
"Pierre Boniface wines are produced at Les Rocailles, a true earthly paradise nestled in the French Alps. When Pierre took over from his father he had a modest business, farming 20 acres and buying grapes from another 20 on handshake deals. Les Rocailles is now one of the biggest and best producers in Savoie, with nearly 50 acres owned and grapes purchased from nearly 60 more! Apremont is the signature wine, accounting for 70% of the production, and the vast majority of HPS Boniface sales.

Growers like Pierre usually look forward to passing their domains on to their children, but in this case, it was just not meant to be. His daughter Miriam is a computer systems architect (who recently interrupted her doctoral studies to get an MBA from Wharton) and his son is literally a rocket scientist (with a PhD in ballistics, he now works on jet engine design for Pratt & Whitney). Pierre subsequently sold the business to Guillaume Durand and Alban Thouroude, two young men (born and bred in Savoie) with MBA's from the University of Grenoble. All of the winery/vineyard staff has stayed on, and Pierre will continue to actively consult for 5 years. We can confidently report that quality has never been better!

Pierre Boniface is a cornerstone of the HPS portfolio. The wines represent great values, and are a revelation to those unfamiliar with wines from Savoie. Press (Parker, The Wine Advocate, The New York Times, more...) has been stellar and just keeps on coming, with recent features in The Wine Spectator and Martha Stewart Living on XM radio." -Importer