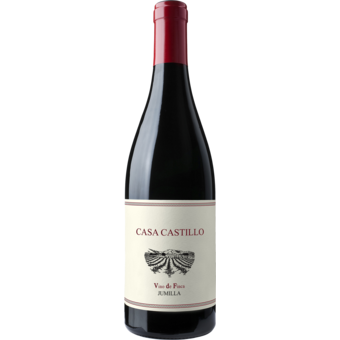 "Casa Castillo is the name of a property in the outskirts of Jumilla, a classical Mediterranean estate with different cultivars (almonds, olives, pine trees...) and of course 1...

The 2018 Vino de Finca is a blend of Monastrell with 25% Garnacha from a cooler, more continental vintage. The Monastrell is from 20- to 30-year-old vines, and the 8-year-old Garnacha is from limestone-rich soils. It fermented in the underground stone pools with 25% to 30% full clusters and indigenous yeasts and matured in 5,000-liter foudres and 500-liter barrels for 12 months. As all the Garnacha plots are now in production, there has been a higher percentage of it in the blend since 2017. The selection of plots used for this wine results in something more serious, more austere and with more depth than the entry-level Casa Castillo. He doesn't use Syrah in this blend because he thinks without Syrah it has a more Mediterranean profile, with aromatic herbs, thyme, rosemary and lavender and the slightly more rustic notes of the Monastrell. 53,000 bottles produced. It was bottled in December 2019.

"Casa Castillo is the name of a property in the outskirts of Jumilla, a classical Mediterranean estate with different cultivars (almonds, olives, pine trees...) and of course 174 hectares of low-density vines (167 in production) that could very well merit the estate its own appellation of origin. Production averages 315,000 to 330,000 bottles of very high quality wines that I consider the best in the region and among the best in Mediterranean Spain, producing world-class Monastrell, the main variety they grow. All their vineyards have been certified organic since 2019, and they are slowly moving their new plantings toward new plots with higher limestone content and leaving the valley floor, where there's more sand and silt. I tasted the 2018s, from a continental and cooler vintage that followed the path of 2016, while 2015 and 2017 were textbook Mediterranean years. 2018 saw a short and cool summer with humid weather in mid-August. There was little rain, but the high levels of relative humidity made them work hard in the vineyard, removing the leaves and exposing the clusters to avoid botrytis and favor the ripening of the grapes. It was a very late harvest that started on September 13. José María Vicente described it as a very challenging year, but the result for him is exceptional, fine and more fluid wines with higher acidity that he compares with 2008, wines with such intensity that he had to give them longer élevage. It's a kind of discrete vintage that is going to grow in bottle. There is no Cuvée N in 2018, as the wine is only produced in classical Mediterranean years. 2019, which I'll taste next time, is an atypical vintage that was marked by heavy rains on September 13. He foresees 2020 as a typical Mediterranean year, even if the summer started late and (as of August 10th, when I wrote this) he's waiting for the next two weeks, which are the ones that will make or break the year. It will be an early harvest. There will be some white grapes (Garnacha Blanca and Macabeo) in 2020 to make some trials and perhaps some white wine in 2021. To close the circle and have a full Mediterranean expression of the estate wines, he's contemplating planting some Cariñena..." - Luis Gutierrez, Wine Advocate