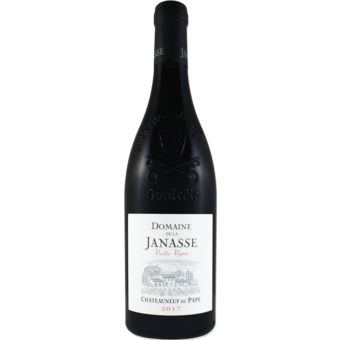 "The cuvee Vieilles Vignes is from 60-110+ year old vines of Grenache, Mourvedre, Syrah along with smaller percentages of other permitted varieties that are grown in these old ...

"The 2017 Châteauneuf Du Pape Cuvée Vieilles Vignes is another killer effort from this estate. Coming from the La Janasse and La Crau lieux-dits and brought up in foudre, its deep purple color is followed by blockbuster notes of crème de cassis, blackberries, chocolate, graphite, and earthy, rocky, mineral-like nuances. It's deep and full-bodied, with a ripe, powerful yet balanced style and a great finish. A classic example of this cuvée. it's going to benefit from short-term cellaring and keep for two decades or more."

"The 2017 Chateauneuf du Pape Cuvee Vieilles Vignes derives from parcels planted on classic clay and galets roulés soils. It's 65% Grenache, 20% Mourvèdre, 10% Syrah and 5% other varieties. Tight, intense, even clenched, it's in need of several years' cellaring before it becomes truly enjoyable to drink. For now, those gorgeous black cherries are restrained behind a firm wall of tannins. Full-bodied and rich, this is ripe, it just requires patience."

"The cuvee Vieilles Vignes is from 60-110+ year old vines of Grenache, Mourvedre, Syrah along with smaller percentages of other permitted varieties that are grown in these old vineyards. The wine is sourced from 4 terroirs: pebbly clay, sand, gravelly red clay and sandy limestone.

Over the last quarter century, Domaine de la Janasse has become one of the most highly-regarded estates in Chateauneuf-du-Pape. Led by siblings Christophe and Isabelle Sabon, the estate combines the best of both traditional and modern techniques to craft a collection of truly riveting wines from "simple" value-priced VDP’s to their benchmark Chateauneufs.

The estate was founded in 1976 by Aime Sabon, the father of Christophe and Isabelle, who still oversees the vineyards. The property consists of 40 hectares, spread over as many as 70 different parcels throughout the appellation. The terroirs range from sandy soils, as can be found in their well-known plots in the North of the appellation – Chapouin and La Janasse– to lightly-colored clay limestone soils and gravelly red clay and galets, most notable in their plots in Le Crau in the South. While Aimé works the vineyards organically, his children, Christophe and Isabelle, arxe in charge of wine production. Christophe is a self-proclaimed “great defender of Grenache,” which still represents 75% of their vines. With assistance from Aimé’s farming and Isabelle efforts in the cellar, he harnesses the typical exuberance of Grenache-based wines through careful vinifications that respect both terroir and vintage The results are a wide range of rich and flavorful Châteauneuf-du-Papes, Côtes-du-Rhônes and Vins de Pays that are complex and balanced – often in contradiction to an region better known for sheer size and power.