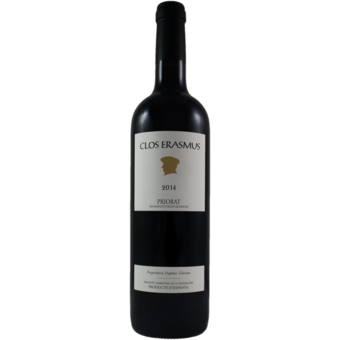 "In 1988 Daphne Glorian, at the time employed by an English Master of Wine in his Paris office, was in the throws of epic folly and spent her life’s savings on 17 terraces of...

“There is a little more Syrah in the blend of the 2014 Clos Erasmus, where it reached around 30% to complement the majority of Garnacha. As is the norm, the wine matured for some 18 months before bottling, with most of the volume in French oak barrels, 40% of which are renewed each vintage, but there are also one or two amphorae...It showed a bit shy at first, but when I finally came back to it, I found that it had really blossomed with a mixture of violets, ground, smoky meat and black raspberries. The slight increase in Syrah was noticeable, but it somehow also seemed to increase the voice of the slate in the bottle. The palate is medium to full-bodied with terrible balance and elegance combined with inner strength. This is simply terrific. 3,000 bottles were filled at the end of May 2016.”

"In 1988 Daphne Glorian, at the time employed by an English Master of Wine in his Paris office, was in the throws of epic folly and spent her life’s savings on 17 terraces of hillside vines just outside the village of Gratallops. Newly minted friends René Barbier and Alvaro Palacios encouraged her and together with Carles Pastrana and Jose Luis Perez, they pooled their talents and resources to make a new style of wine in a region rich in history and raw materials but without much of a proven track record for fine wines. In 1989 the modern Priorat was born: one wine but five different labels, each which would one day become known around the world: Clos Mogador, Clos Dofi, Clos Martinet, Clos de l’Obac and Clos Erasmus. Today Daphne’s property goes by the name Clos i Terrasses in recognition of the Clos upon which her fame was established and the terraces that she farms. The estate is planted with 75% Garnatxa, 20% Syrah and 5% Cabernet Sauvignon. Clos Erasmus and Laurel are not vineyard designations, but they do begin to take shape in the vineyard. Due to the meticulous farming and observation that takes place throughout the year, by the time fruit starts to reach the cellar in autumn much of the blends have already been mapped out by Daphne. The nascent Erasmus is slated for twelve 228 litre French oak barrels and a few amphorae. In any given vintage about 7 of the barrels are new and 5 are second-fill. In some vintages there will a declassification of a barrel into Laurel. Clos Erasmus remains in barrel for 18-20 months before bottling." Importer