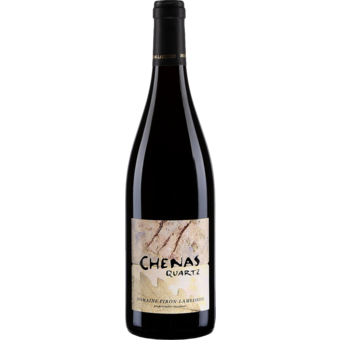 "Managed by Dominique Piron, 14th-generation winemaker, and his wife Kristine Mary, Domaine Piron is a winery with 60 hectares of traditionally bush-trained vines that average ...

"Managed by Dominique Piron, 14th-generation winemaker, and his wife Kristine Mary, Domaine Piron is a winery with 60 hectares of traditionally bush-trained vines that average 50 years old. Domaine Piron specializes in the Beaujolais appellation of Morgon but also produces wine from the appellations of Beaujolais, Beaujolais-Villages, Regnie, Brouilly, Moulin-a-Vent, Fleurie, Chenas, Beaujolais and Bourgogne Blanc. Domaine Piron is dedicated to cultivating their vines with a deep respect for nature and the expression of the soils."

"Piron's Chenas may be the benchmark bottling for the smallest appellation in Beaujolais. Bearing the title "Quartz" in deference to the high mineral content of its soils, Chenas combines both the power of Morgon with the aromatics of Julienas, and is considered one of the Beaujolais crus most suited to long-term aging."

"Piron is highly respected in France. He once produced this wine in cooperation with famed Burgundy producer Lafont, but since 2007 has bottled his Chenas as the house bottling of three-star Michelin restaurant Hotel Lameloise. Today, the label bears the name of Lameloise alongside Piron as a testament to this relationship." - Importer