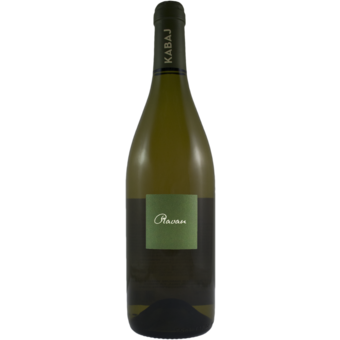 **This is an orange wine.** "The people Generations of Kabaj (Ka-bye) tended vineyards in Goriška Brda, but the family had never bottled wine commercially. In the late 80’s ...


"The people Generations of Kabaj (Ka-bye) tended vineyards in Goriška Brda, but the family had never bottled wine commercially. In the late 80’s Katja Kabaj met French-enologist, Jean-Michel Morel, while he was working at an Italian estate, eventually they married and settled in Katja’s family village of Šlovrenc, to raise their family. In 1993, the first vintage of Kabaj was released. In addition to vineyards and winery, the estate includes charming bed and breakfast accommodations, and a simple restaurant serving home made local fare with a French touch. Today, 3 proud generations of Kabaj maintain this genuinely family business. This has led to many accolades including being named a Wine & Spirits Top 100 Winery both in 2013 and 2015.

"Disciplined, tireless and determined, winemaker and former French Legionnaire, Jean-Michel Morel’s motto is, “Quality must go up”. His own penchant for world class wine, especially Champagne, drives this. Having worked from Bordeaux to Collio, he is a winemaker in the “classical” sense, but sees experimentation as necessary to improvement. His curiosity, and the magical wines of neighbor and “Amphorist” Jasko Gravner, led him to Georgia to study its ancient monastic wine culture.

"Ultimately, Jean-Michel adapted some of their techniques to the Kabaj wines. Most significant is the practice of macerating white grapes for close to a year in buried 3500 liter ‘Qvevri’, imported from Georgia. The blend of their contents, ‘Amfora’, is today the flag ship wine of the estate. In contrast, the red wines of Kabaj, made primarily from Merlot, Cabernet Franc and Cabernet Sauvignon are vinified in typical Bordeaux fashion. Contradictory as this may sound, it is typical of Kabaj. Jean Michel is not interested in convention, only terroir and quality." - Importer