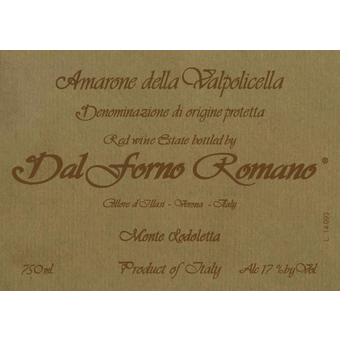 "This is a real bruiser of a wine, and it marks the first of three excellent back-to-back vintages (2011, 2012 and 2013). The growing season was full of surprises and many farming decisions had to be made at the spur of the moment. The 2011 growing season started off cool, but there was an explosion of heat in mid-August that remained intense until a final cooling period at harvest. Fruit ripening had been behind schedule, but that August heat helped to pick up the pace. (By the way, this is also the year Michele Dal Forno got married). The 2011 Amarone della Valpolicella Monte Lodoletta is an incredible wine that has magically managed to maintain the fresh acidity associated with the cooler part of the growing season. It also shows the inky black concentration and ripeness that is reflective of the hottest part of the summer. I am impressed by the tannic management, as the wine is silky and fine at this young stage; however, the underlying structure promises a long aging future, should you chose to put your bottle aside. Overall, this vintage is slightly more accessible and ready to drink if you don't have the patience for cellar aging."

"Fully saturated ruby. Very deep, intense aromas of blackcurrant, plums macerated in alcohol, soy sauce, coffee and underbrush on the complex nose. Rich, dense and balanced, with nicely focused flavors of dark berries and aromatic herbs that have a noteworthy savory tang. The long finish features repeating hints of soy sauce, espresso and underbrush. Dal Forno’s is the recognized master of a uniquely powerful, ripe, and concentrated style of Amarone."

"Very dark fruits on the nose with hints of bark and dried flowers. Full body, soft and silky tannins with a chewy finish. Loads of dark chocolate and berry. Flavorful and balanced. Drink now."