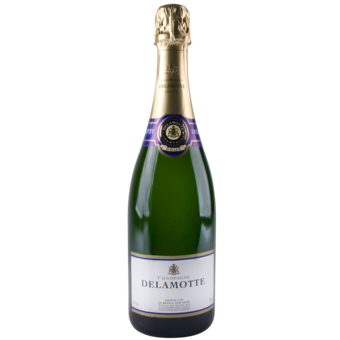 "This well-known Le Mesnil house actually has its origins in Reims, where it was founded by François Delamotte in 1760. Even as early as the 18th century, however, Delamotte ma...

A luscious and generous effort with depth and fine acidity. Anything but austere yet balanced and elegant; fresh, stylish, and long.

Pillowy and charming, the latest rendition of Delamotte's NV Brut offers up attractive aromas of orchard fruit, fresh bread and citrus oil. Medium to full-bodied, seamless and elegant, with a pretty pinpoint mousse and lively balancing acids, it's drinking well out of the gates but will also develop gracefully for a few years in the cellar.

"This well-known Le Mesnil house actually has its origins in Reims, where it was founded by François Delamotte in 1760. Even as early as the 18th century, however, Delamotte made the decision to focus on Côte des Blancs chardonnay, and around the turn of the century François’s son, Alexandre Delamotte, moved the house to Le Mesnil-sur-Oger, in order to be closer to its sources of grapes. In 1828, Nicolas-Louis Delamotte, Alexandre’s brother, took the reins of the house, but he died in 1837 without leaving any heirs, and the house came into the hands of a minority partner in the business, Jean-Baptiste Lanson. The house continued under the name of Veuve Delamotte-Barrachin until 1856, when Delamotte’s widow passed away and the Lanson family gained full control of the company, reestablishing it as Lanson Père et Fils. Thus, the beginnings of the house of Lanson actually originate in Delamotte. However, the house of Delamotte was to continue its existence in later generations of the Lanson family, when Marie-Louise Lanson married into the de Nonancourt family. Marie-Louise wasn’t the primary inheritor, so she didn’t take control of the Lanson house, but received the house of Delamotte instead. Marie-Louise had two sons, Charles and Bernard—Charles would inherit the family estate of Delamotte in 1927, while Bernard took control of a small house called Laurent-Perrier, which Marie-Louise had purchased in 1938 when Mathilde Laurent-Perrier passed away without heirs. By 1988, Bernard de Nonancourt had transformed Laurent-Perrier into one of the most important firms of the Champagne region; Charles sold the house of Delamotte in that year to the Laurent-Perrier group, who six months later also acquired the neighboring house of Salon. Today, Delamotte and Salon function as sister houses, sharing offices and facilities in Le Mesnil. Both houses are under the direction of Didier Depond (pictured), although the wines are made by Michel Fauconnet, chef de cave of Laurent-Perrier, who took over from former chef de cave Alain Terrier in early 2004. Delamotte owns six hectares of grapes in Le Mesnil, Oger and Cramant, and in the years when Salon is not produced, those grapes from Salon’s contracts will often go into the Delamotte Brut or non-vintage Blanc de Blancs. As with Salon, all of Delamotte’s wines are made in stainless steel tanks, with no wood used at all; however, unlike Salon, all of Delamotte’s wines systematically go through a full malolactic." -Peter Liem, Champagne Guide