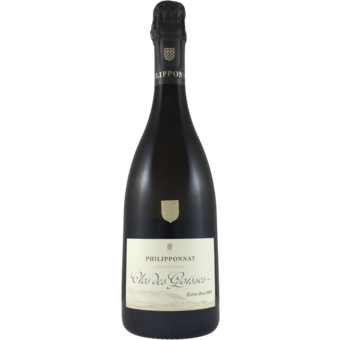 "Until Krug’s Clos des Mesnil was first made in 1979, Clos des Goisses was the region's only great single-vineyard wine. From its first vintage in 1935, it was not only unchall...

"One of the highlights of this important Champagne vintage, Philipponnat's 2008 Extra Brut Clos des Goisses is fabulous. Rich, ample and yet also full of the tension that makes the Champagnes of this year so appealing, the 2008 Goisses is crystalline and incredibly pure. Clos des Goisses has a track record of aging brilliantly for decades. Even knowing that, I am surprised by how harmonious the 2008 is at this early stage in its life. Yes, there is plenty of youthful austerity, but at the same time, the 2008 is remarkably poised and has more than enough mid-palate creaminess to play off the bright, salivating acids. Don't miss it! Disgorged: April 2017. Dosage is 4.5 grams per liter."

"Shimmering pale gold with green flecks. The slight majority of Chardonnay is a fine decision, as unlike a lot of '08s, the wine is already a pleasure to drink - but it will continue to live a long and distinguished life. Terrific expression of a complex range of citrus scents, confit of lemon and a touch of bergamot. The palate is stunning, with a promise of burgeoning flavours into the 2030s. The fruit is ideally, subtly ripe in classic cooler conditions, but also mineral-stamped in the Clos' tradition. The 2008 has everything - a true great."

“45% Pinot Noir, 55% Chardonnay - this is exceptional for Clos des Goisses, which is usually about two-thirds Pinot Noir. They thought the Chardonnay was particularly good in this vintage (plus they had uprooted some Pinot in 2001/02 and are waiting for the replanted vines to mature). Disgorged April 2017 – this is the first of (probably) three disgorgements. Dosage always 4.25 g/l, whatever the vintage.

Pale gold, gorgeously rich fruit – peach and honeyed citrus with light yeasty notes. Creamy and shot through with citrus intensity, perhaps a hint of bergamot. With all this depth of flavour, the freshness is notable and perfectly balanced. Charles Philipponnat showed this alongside the 1996 (a 50/50 blend) as he thinks they were quite similar vintages, though some 1996s, he noted, 'have collapsed and left only acidity'. He also explained that in his experience, it is not just acidity that contributes to longevity but also 'the purity of aroma'. Hence my long drinking window here. Going back to this later: the aromas have developed to include a slight suggestion of ginger and honeycomb and it went extremely – unexpectedly – well with the goat's cheese salad. This is clean limbed and very pure." -Julia Harding, MW

"Until Krug’s Clos des Mesnil was first made in 1979, Clos des Goisses was the region's only great single-vineyard wine. From its first vintage in 1935, it was not only unchallenged as the beacon of terroir in Champagne. It was the sole argument that great Champagne could be made from a single site, rather than a blend of vineyards has had been done for centuries in the region.

Thierry Garnier Philipponnat was founded in 1910 by Pierre Philipponnat, who also acquired Champagne’s single oldest vineyard, the Clos des Goisses monopole, in 1935. Best known for the prestige cuvée from this unique site, and their rich, complex Pinot Noir based blends; Philipponnat has risen to even greater heights since the appointment of direct descendant Charles Philipponnat as director in 1999.

Even today, the respected American Champagne writer Peter Liem calls Clos des Goisses “arguably the greatest vineyard site in all of Champagne.” British Champagne expert Tom Stevenson says that “there can be no doubt that Clos des Goisses boasts the most climatically distinct, naturally occurring and expressive terroir in Champagne.” No other Champagne vineyard can match its gifts: an unbroken 30 to 45 degree, fully south facing slope of pure chalk backed by a small plateau directly above the Marne River. In warm years the plateau assures balance; in cool years the steep southern slope guarantees ripeness.

The corporate changes that have swept through Champagne in recent years seem sure to rob many old houses of their connection to the past. But one small jewel of a house is moving ever closer to its roots: Philipponnat.

It is one of the last houses to be run by a member of its founding family. And Charles Philipponnat is a true Champenois, descended from winemakers, cellarmasters and growers dating back nearly 600 years.

Champagne is in Charles’ blood, and this helps to explain Philipponnat’s recent resurgence. Twenty years ago, the house was known largely for its iconic Clos des Goisses—the majestic tête de cuvée made from Champagne’s single greatest vineyard.