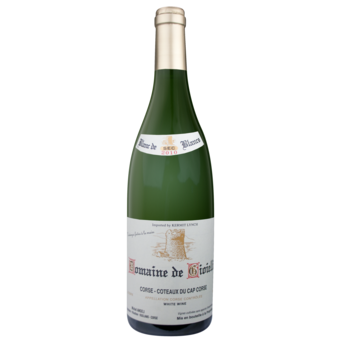 WINE NOTES: "Only native yeasts are used during fermentation. Fermented in cement and stainless steel cuves; in some vintages he blends in Codivarta. Age of Vines: 40 years av...

"Firm and savory, with hints of licorice and slate to the honeydew melon, tangerine and crisp apple flavors. Crunchy finish. Drink now through 2016. -KM" (2012)

WINE NOTES:
"Only native yeasts are used during fermentation. Fermented in cement and stainless steel cuves; in some vintages he blends in Codivarta. Age of Vines: 40 years average." - Importer

WINERY:
"Cap Corse, a largely isolated and thinly populated peninsula at the top of Corsica, sits like a finger pointing up at Genova, its former colonial ruler. The Genovese landed on the Cap in the 14th century and from there soon conquered the entire island. On the Cap, they left an indelible mark on the land, building towers on the cliffs overlooking the sea to watch for other invaders. One Genovese in particular, Monsignor Doria, from one of the most illustrious families of the Genovese Empire, landed in the Cap and settled in a cove not far from the sea, creating an estate he came to call his "Gioielli" or his "Crown Jewel" in the dialect of the time. A villa was built in the middle of the hills which form a natural amphitheatre and on which vines and olives were planted and flourished." - Importer

WINEMAKER:
"Little has changed at the domaine since it began, and it is still Michel [Angeli] who works the vines and makes the wines on his own as he has done for nearly six decades. The tourist buses do not stop at Domaine Gioielli - in fact, it is very hard to find. Angeli never intended to make his wines known beyond his neck of the woods and never exported anywhere, not even to mainland France (!) before meeting Kermit. Since the beginning he has paid little attention to the outside world, uninterested in the new technologies and fads that have afflicted so many other domaines. His wines have a timeless sense of place, much as the one who makes them, a wise, gentle, true artisan who lives for his metier." - Importer