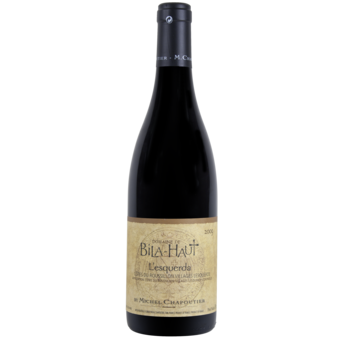 Wine: "The color. is intense, deep and steady. The nose shows maturity with aromas of black fruits and warm spices. We find the soils of origin are revealed with floral notes...

"Powerful and complex, with pepper and iron notes behind the dark currant, wild plum and dried raspberry flavors. Mineral and slate linger on the muscular finish, with hints of smoke and mint. Drink now through 2019. 2,000 cases made. KM" (2012)

"From Grenache with a bit of Carignan and roughly one-third matured in larger cask, the Bila-Haut 2009 Cotes du Roussillon-Villages Lesquerde L'Esquerda is grown on granitic soil in the town - high up above the Agly and west of Maury - for which it is named, and where Chapoutier has taken-on considerable acreage. Due to have been bottled in May, it is redolent of fennel, bracken, arbor vitae, and cinnamon behind which well-up ripe purple plum and blueberry that lusciously saturate the palate. Low-toned suggestions of carob and walnut add counterpoint to the herbal and fruit intensity exhibited in a strong, penetrating finish. This ought to prove versatile over at least the next 4-5 years. " (06/11)

Wine:
"The color. is intense, deep and steady. The nose shows maturity with aromas of black fruits and warm spices. We find the soils of origin are revealed with floral notes (violet) which are lightly smoky. We can find the same aromatic notes on the Northern Cotes du-Rhone soils, which are the birthplace of the Syrah. On the palate the attack is both supple and powerful. Tannins are at the same time powerful and tight. The finale is fresh without any heaviness. The wine is mainly made of Syrah and then Grenache and Carignan varieties. The vineyard of Lesquerde is constituted of hill top plains and slopes which are made of granitic soil. Its 350m altitude provides it a unique terroir. Each plot is hand-harvesting between 15th September and 15th October. This is a late terroir because of the altitude and nature of soils. The grapes are destemmed and maceration lasts around 4 weeks. Extractions are carried out by pumping-over. Temperatures don't exceed 32 degrees C. 10% of the wine is aged in oak casks and the remain in concrete tanks." - Winery

Domaine de Bila-Haut :
"The Roussillon history is complex and compelling, and has at times been quite violent. Terraces on stony soil, with a rich geological background and a climate that man has adopted for his crops. The Roussillon was bound to attract Michel Chapoutier's attention. He decided to locate his domain at Latour de France. Black and brown schist to give the wine a solar touch. Gneiss for minerality and freshness. Combination of Limestone and chalk for strength and balance."

"Three varieties of grapes grow on the land covered by Domaine de Bila-Haut. Syrah, with its savage aromas of scrub and spice. Grenache, so full of surprises. And Carignan, for mineral wines with crispy tannic notes. The "Vignes de Bila-Haut" and the "Domaine de Bila-Haut Occultum Lapidem" are the main expressions of this terroir. However, Michel Chapoutier wanted to obtain more via this site, to seize the quintessence. It took him six years of standing back, observing and analysing to give life to this precious and exceptional wine called "V.I.T." which stands for "Visitare Interiore Terrae". Precious by its blending. Grenache grapes from 70 year old vines, grown on a magnificent plot in the heart of the 'Garrigue' scrubland. Enthusiasm, richness and complexity. Then Syrah grapes, ripened slowly on vines grown on clayey limestone soil giving powerful, silky-smooth tannins, and blended with Syrah grapes grown on the company’s most beautiful schist based land. An elegant bouquet and a sophisticated flavour in the mouth. Also exceptional because it is bold, like the people who gave this land its identity."

"The story is going on in 2008 and is now taking place near the village of Lesquerde. There, the land is made of high limestone based cliffs and dry soils over which the "tramontane" wind blows... Then Michel Chapoutier’s interest for this region rises again and new wine is born: "L'esquerda". This outstanding wine is mainly based on beautiful Syrah and Grenache grapes from the nicest granitic terroirs. "L'esquerda", meaning "the fault in the rock" in Catalan, is the faithful expression of a personality, of the identity of a region. Another discovery by Michel Chapoutier." - Winery