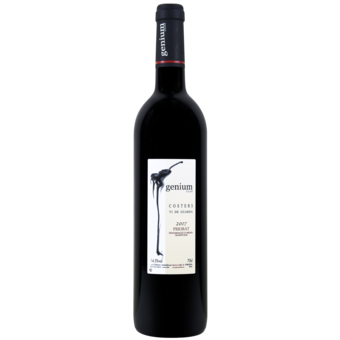 WINE: "This wine was made from grapes planted on slopes in the region, named 'Costers' (dramatically steep land, 45 degrees, where no machine can be used), where the vineyards...

"The 2007 Genium Costers is composed of 50% Carinena, 30% Garnacha, with the balance Merlot and Syrah. It was aged in 100% new French oak for 14 months before bottling without filtration. A glass-coating opaque purple color, it offers up an already complex bouquet of pain grille, liquid mineral, Asian spices, incense, plum, and black cherry. Full-bodied, opulent, layered, and loaded, this large-scaled offering manages to remain light on its feet while displaying an exceptionally lengthy finish. Give it 4-5 years and drink it from 2015 to 2027."

"Genium Celler began in 2002 when six families from the Priorat village of Poboleda joined forces." (05/11)

"(50% carinena, 30% garnacha and 10% each of merlot and syrah) Opaque ruby. Pungent dark berries and spicecake on the nose, with complicating notes of dried rose and cola. Fleshy and smooth, offering sweet black raspberry and cherry compote flavors and an absence of rough edges. Already appealing but this is balanced to age. The finish is sweet, precise and very long." (10/10)

WINE:
"This wine was made from grapes planted on slopes in the region, named 'Costers' (dramatically steep land, 45 degrees, where no machine can be used), where the vineyards are practically a hundred years old, a fact that provides a repeatable minerality, concentration and structure in comparison to other zones. The grapes undergo a 48 hour pre-fermentation cold soak followed by temperature controlled fermentation between 84 degrees F to 91 degrees F in small stainless steel vats, and are macerated for a 30 day period. Aged in new French Allier oak barrels of various toasts and coopers for 14 months. Unfiltered." -Importer

WINERY:
"In the year 2002, six families from the municipality of Poboleda (Priorat) with a long tradition in vine growing decided to join their efforts in order to make high quality wines from their own crops. All of them have day jobs outside of the bodega, but share the work in the vineyards and cellar to make the project succeed."

"This winery is located in the basement of a house that dates back to 1265, which was the very first settlement of the Carthusian monks of Scala Dei. 15 hectares of vineyards are owned between all of the families. 7 hectares are Costers, 3 hectares of organically farmed vines (Ecologic) and 5 hectares of terraced vines on narrow terraces with two rows of vines each."

"The goal of the winery is to produce wines with a typical character of Priorat based on the local Garnacha and Carinena. Having vineyards in three different zones of Priorat (Poboleda, La Morera del Montsant and Torroja del Priorat) allows for different character, tone, complexity and personality in the wines. Aging in oak is very important for the style of wine, as without it the wine would seem unfinished, but only light to medium toast is used so that wood flavors do not dominate." -Importer