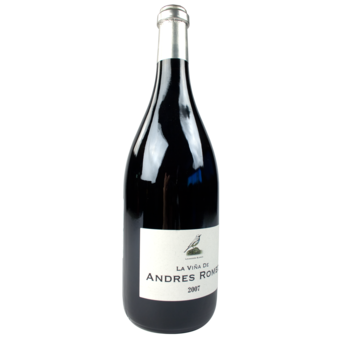 "The 2007 La Vina de Andres Romeo is a saturated purple color with an alluring aromatic array of smoke, mineral, lavender, Asian spices, leather, black cherry, and blackberry. This leads to a dense, mouth-filling, rich, plush offering that is structured for the long haul. This beautifully balanced wine will profit from a minimum of 6-8 years of cellaring and will be at its best from 2016 to 2037. Patience is required!"- 95 Points - Jay Miller - The Wine Advocate

WINE:
"Benjamin Romeo has been the winemaker at Artadi since its founding in 1985. He was born in the heart of Rioja in the village of San Vicente de la Sonsierra in 1964. The son of a grape grower, his entire life has been spent in a relationship with the vineyards and wine. He studied Enology at the University of Madrid."

"In 1995 Benjamin bought an old 14th century winery cave under the fortress of San Vicente de la Sonsierra. For centuries the wine was made at the winery in the village below and then carried in goatskins to the caves. Because each goatskin varied in capacity, there was a person stationed in this room at the entrance to the aging cave whose sole function was to count and weigh each skin as it came into that particular cave. When the wine was ready for sale, the process was reversed and the skins were counted and weighed on their way out. That room where the counting and inventory took place is called the Contador."

"Seven centuries later, Benjamin Romeo is using these same caves to store and age his wines in near perfect conditions, thus respecting old traditions while utilizing ever-evolving modern wine technology. Grapes are sourced from very old vines from a small old hillside vineyard known by the locals as “corros”. The elevation of these plots is from 1,250-1,500 ft. The soil is calcareous clay, poor in organic matter. The climate is Continental." - Importer