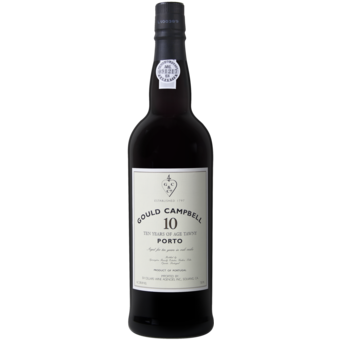 The Wine Enthusiast most recently rated the Gould Campbell 10 Year Tawny Port in 2006: "An attractively dry style of wine, with a concentrated inner core of firm acid and li...

The Wine Enthusiast most recently rated the Gould Campbell 10 Year Tawny Port in 2006:

"An attractively dry style of wine, with a concentrated inner core of firm acid and lightly burnt flavors. It has intensity, along with good fruitiness. This lesser brand of the Symington group is worth seeking out, both for its quality and for its good value." 90 points Wine Enthusiast

WINERY:
"Gould Campbell was founded in 1797 when Garret Gould, prompted by the political strife wracking his native Ireland, sailed to the hospitable shores of Portugal where he established the firm of Messrs. Gould Brothers & Co., operating from both Lisbon and Oporto. The firm survived the trials of the Peninsula War which followed a few years later, when the Anglo-Portuguese army of the Duke of Wellington expelled the French invaders, and soon became very successful bringing into partnership the prestigious Merchants and Bankers Messrs. James Campbell & Co. Gould Campbell came to establish a reputation for the excellent quality of their Ports and their Vintage Ports in particular. In 1970 the firm was acquired by the Symington family who had themselves been Port producers since 1882. It is therefore one of the very few Port shippers which remains a private family business, thus retaining its individuality and distinctiveness."

"The grapes for Gould Campbell Ports are drawn from vineyards in the Alto Douro area, where the yields are very low (about one pipe - 550 litres - per 1,000 vines) but the wines have immense complexity and depth. The winery is situated at Pinhão, where a proportion of the wines are made in modern temperature controlled fermentation tanks. However, a significant proportion of Gould Campbell Ports are still made in small quintas in the hills around Pinhao, using the ancient method of treading the grapes by foot in stone tanks called lagares." -Winery