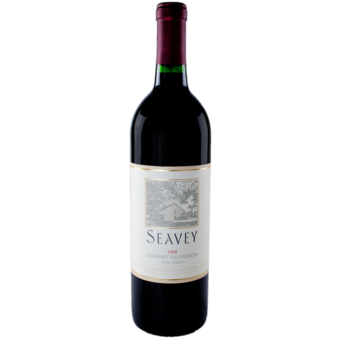 "The outstanding 1998 Cabernet Sauvignon, produced from an extremely small crop, is an example of what the Napa Cabernet Sauvignon producers are jokingly saying is "another fine wine from a bad vintage." A rich, full-bodied, dense effort on a fast evolutionary track, the 1998 is loaded with chocolatey, black cherry, and cassis fruit, an open-knit, sexy, expansive texture, outstanding concentration and purity, low acidity, and a fat, chewy finish. It will be drinkable upon release, yet promises to age well for 12-15 years." 90 points Robert Parker

"Full ruby. Aromas of black cherry, licorice, shoe polish and bitter chocolate. Concentrated and ripe but a bit tough in the mouth; in a distinctly dryer style than the '99. Flavors dominated by cassis and licorice. Finishes with rugged tannins. Built to age. There actually about 14.5% alcohol here, according to winemaker Philippe Melka." 90 points - Stephen Tanzer - International Wine Cellar

Cellar Tracker Favorite! This wine has a median of 91 points in 45 notes. Click here to see all of the different reviews!

WINE:
"Seavey Vineyard's ninth estate-produced Cabernet, the 1998, was made from 100% Cabernet grapes that came from vines planted on several different locations of the South-facing hillside vineyard. The 1998 growing season was a challenge because of a cooler and wetter than normal spring and summer, followed by rain in late September. Rather than rush to pick, we waited until October 14 to begin harvesting and did not finish until November 4. The resulting Cabernet has a dense, opaque purple color and lots of black cherry, bitter chocolate and cassis-like fruit, full ripeness and outstanding concentration, a rich texture and a fat, chewy finish."

"Winemaking style followed classic Bordeaux methods. Harvested at an average brix of 24 degrees, the juice remained in contact with the skins for an average of 21 days and thereafter the wine underwent malolactic fermentation and was aged in French oak barrels (40% new oak) and bottled on April 27, 2000. Production Team includes the winemaker, Philippe Melka, and the Vineyard Foreman, Mario Gutierrez." -Winery

This was also rated 89 points by the Wine Spectator.

"The outstanding 1998 Cabernet Sauvignon, produced from an extremely small crop, is an example of what the Napa Cabernet Sauvignon producers are jokingly saying is "another fine wine from a bad vintage." A rich, full-bodied, dense effort on a fast evol...