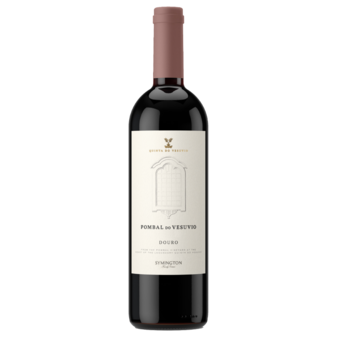 "Concentrated, deep red color. Exceptional freshness on the nose and palate. Floral aromas of roses and rockrose with a hint of vanilla in the background witnessing well integr...

The second wine from the magnificent Vesuvio estate (which also makes Port) is full of minerality while also being structured for medium-term drinking. Vineyards around the dovecote (Pombal) are the source of a rich, accessible wine that will be ready from 2021

The 2017 Pombal do Vesúvio (Quinta do Vesúvio) is mostly a 54/40 blend of Touriga Franca and Touriga Nacional with 6% Tinta Amarela, aged for eight months in used French oak. It comes in at 14.4% alcohol, an uptick from last year's vintage. Wow. The fruit here seems to be the essence of young fruit, primary, sexy and just delicious. Of the Symington selections this issue (including the sister producer Prats & Symington), this is the best value, the biggest overachiever. One of the best in the brand so far—maybe the best yet—this starts off with that great fruit laced with plums and dried blueberries, but it does not neglect the concepts of balance, finesse and structure. Beautifully constructed, this has moderate tannins to support the fruit and a big, long finish. It feels fresh rather than jammy, despite both its power and sex appeal. The only question now is where this goes—can it develop some complexity, some additional distinction in the cellar? If it does, it might be entitled to an uptick. Let's start here and see where it goes. No matter what, it is a nice value. Drink 2020-2035

"Concentrated, deep red color. Exceptional freshness on the nose and palate. Floral aromas of roses and rockrose with a hint of vanilla in the background witnessing well integrated oak. Very expressive on the palate with succulent black plum and wild berry flavors concentration and elegance in perfect harmony. Polished tannins underpin the framework of this very gastronomic wine."-Winery