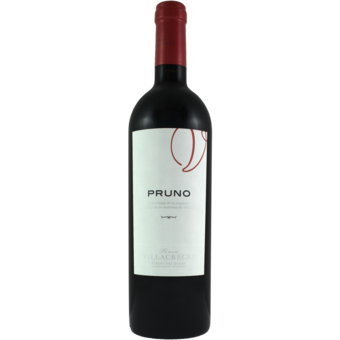 "After purchasing Finca Villacreces in 2004, the Anton family began the hard work of reinvigorating their vines while also ending contracts by which they sold a significant po...

Aromas and flavors of blueberries and black licorice here. Full body. Integrated tannins give the wine form, but don’t impose too much. Better in 2021.

"After purchasing Finca Villacreces in 2004, the Anton family began the hard work of reinvigorating their vines while also ending contracts by which they sold a significant portion of their fruit to neighbors. In the process, they began to notice that some of their plots – those adjacent to the Duero on sandier soils – made an elegant and refreshing style of wine in comparison to the more dense and concentrated, classic Ribera del Duero. Thus Pruno was born by combining fruit from these sandier terroirs with fruit from the clay soils further from the river. It represents one of the greatest values in Ribera del Duero coming entirely from estate vineyards centered and an ancient grove of pines, surrounded on two sides by the Duero river and with Vega Sicilia on one remaining border, and a vineyard belonging to Pingus on the other. Nice address! Vineyards: Estate vineyards. Age of Vines: Younger vines (5-25 years). Altitude: 2296 Feet. Aging: 12 months French oak barrels – three years old. Farming: Sustainable. Out of the 62 hectares of Finca Villacreces, only half of them (the oldest) were used to produce Finca Villacreces. The rest of the grapes were being elaborated the same way and aged in the same type of barrels to produce a wine that was sold to another top producer from Ribera. It is from these younger vines that Pruno was created in order to satistfy the demand in the market for a high quality wine with a lower price. The style and quality of Pruno is quite different from Finca Villacreces because from the beginning the concept was clear. All the grapes for Pruno are coming from the estate of Villacreces, but the age of the vineyards are between 5 and 25 years old. The blend is different from Villacreces and the time in oak is 12 months compared to the 16 of Villacreces. Deep, black cherry color. Aromas of red fruit embodied with toffee oaky hints from the aging in French barrel revealing a sweet and fruity wine on the mouth. Notes of ripe fruit and liquorice. It offers up a pleasant and soft aftertaste." -Importer