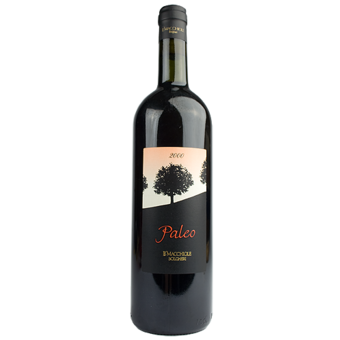 "The 2000 Paleo, a classic Bordeaux blend in this vintage, shows a high toast, vanilla-laced nose of cassis, blackberries, and Cabernet Franc herbs, and a supple, well concentrated palate of ripe fruit, minerals, and tar. The depth and intensity of 1999 are not here, but no one else achieved them in 2000 either. Drink: 2005-2018." -91 points- Daniel Thomases- Wine Advocate

"Rich currant, blackberry and bark aromas follow through to a full-bodied palate, with loads of fruit and round, velvety tannins. Very long and rich. Paleo is slowly changing to a classic Bolgheri Cab blend, and the wine is much better. Cabernet Sauvignon and Cabernet Franc. Best after 2005. 3,000 cases made." -90 points Wine Spectator

"Blackish ruby. Sumptuous aromas of blackberry and cinnamon, with the tell-tale perfume of violet. A bit lean in the middle, but red berry, sage, mint and minerality convey a sense of structure and finesse. Firm, dusty tannins underlie raspberry, licorice and oak on the lingering finish." -90 points- Edward Beltrami- International Wine Cellar

WINE:
"Named for the vineyard of its provenance, Paleo Rosso is the flagship wine for Le Macchiole and was the first wine in Bolgheri to made entirely from Cabernet Franc. Ruby red with violet flecks, its red fruit aroma offers notes of yellow and black pepper, tobacco, and nutmeg. Clean on the palate, it finishes with elegant minerality, ripe fruit, and a hint of balsamic."

"The vineyards are quarzite and arenaceous with calcareous deposits. The grapes are harvested from the 1st to 3rd weeks of September. The wine is fermented in temperature controlled stainless steel tanks and is aged for 14-16 months in new oak barriques." -Importer

WINERY:
"Long before it was fashionable, Eugenio Campolmi saw the potential of his homeland, buying his first vineyard in Bolgheri in 1975 baptized 'Le Macchiole.' In 1987, he hired famed oenologist Vittorio Fiore as a consultant before the latter was joined by Luca d'Attoma four years later. In contrast to his renowned neighbors who focused on Bordeaux blends, Campolmi focused on achieving the purest expression of individual varieties, crafting distinct wines of unprecedented quality. Soon Le Macchiole joined Sassicaia, Ornellaia, and Guado al Tasso as one of the most prestigious estates in Bolgheri. Following Eugenio's death in 2002, his wife Cinzia Merli, who shares her husband's passion, took over at the estate. Working with Luca D'Attoma, she has carried on her husband's legacy by continuing to make great Tuscan wines." -Importer