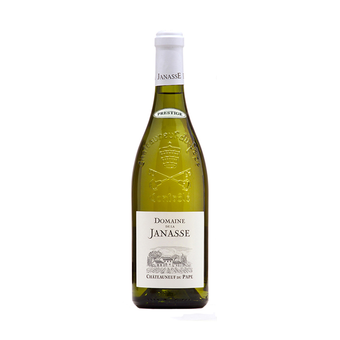 "Unfortunately, there's just four barrels of the 2014 Châteauneuf du Pape Cuvée Prestige Blanc. Made from 60% Roussanne and the rest Grenache Blanc and Clairette, it goes completely through malolactic fermentation and is raised all in barrel before bottling without filtration (same for the traditional white as well). A profound effort that rivals Beaucastel's old vine Roussanne cuvée for the top white in the appellation, it reveals a medium gold color to go with lots of citrus oil, buttered peach, pineapple and mint. Full-bodied, layered, incredibly pure and clean, with a chiseled feel on the palate, it will be better this time next year and can be kept for as long as you'd like. These latest 2013 and 2014s from the brother/sister pair of Christophe and Isabelle Sabon are easily some of the finest wines in the vintages, with both vintages possessing impressive levels of fruit and texture. In addition to their stunning Châteauneuf du Papes (both red and white), their lineup of Côtes du Rhônes continues to knock it out of the park and represents superb value. Looking at the 2014s, these were harvest from September 15 to October 2. Even though this was a large crop, yields here were down over 20% due to dropped crop. As to the 2013s, these were harvested almost all in October and wrapped up over two weeks later than the 2014s, finishing on October 18. When asked which vintage he preferred, 2013 or 2014, Christophe couldn’t pick a favorite, but compared 2014 to 2004 and 2013 to 1999."