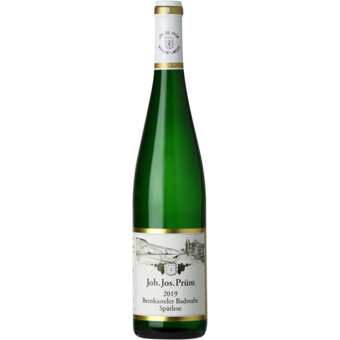 Joh. Jos. Prüm needs no introduction to Riesling lovers, having already become a Mosel icon during the nearly five decades during which its namesake’s son Sebastien was in char...

"The 2019 Bernkasteler Badstube Spätlese opens with a clear and elegant tropical-scented bouquet of mangos, passion fruit and figs along with delicately flinty slate aromas. Round and crystalline on the palate, this is a juicy, salty-piquant and grippy Spätlese with a long, intense, well-structured finish. Tasted at the domain in September 2020."

Tasting 2018 and 2019 chez JJ Prüm was one of the highlights of my Mosel trip in September. However, I decided to taste the highest predicates only in early 2021 and to focus entirely on Kabinett, Spätlese and Auslese, which is the core of the production here. I don't know which wine I should pick out here, but I assume I have rarely tasted better Kabinett wines here than the 2019s, namely the Wehlener Sonnenuhr, the Graacher Himmelreich and the Bernkasteler Badstube. Among the wide range of great Auslesen, I'd like to draw your attention to the iconic Wehlener Sonnenuhr, whose Gold Caps from both 2019 and 2018 are fabulous. I'll be back here in late winter for the rest of the 2018s and 2019s as well as for a range of auctioned wines about which I will report next spring.

Joh. Jos. Prüm needs no introduction to Riesling lovers, having already become a Mosel icon during the nearly five decades during which its namesake’s son Sebastien was in charge. Katharina Prüm has been active alongside her father, Manfred, since early in the new millennium, and the two of them perpetuate a house style that has itself become a Mosel archetype: wines of delicacy and restrained sweetness, often strongly marked in youth by yeasty and otherwise fermentative aromas, and tingling with dissolved CO2. Their longevity is legendary, and the Prüms personally don’t care to drink their own wines – even the Kabinetts – with less than a dozen, and usually many more, years in bottle. The aromas of youthful Prüm wines make it obvious that fermentation here is entirely spontaneous. Manfred makes no secret of his longstanding disinterest in legally dry wines. These are uncompromising, benchmark Mosel wines.

The Bernkasteler Badstube vineyard borders those of the Graacher Himmelreich on the latter’s southern edge. The slopes are on a marginally shallower gradient, with deeper soils than the Graacher and Wehlener, while the western orientation allows the vines longer exposure to the afternoon sun. The Badstube typically produces a wonderfully floral, delicate and mineral wine. Overall, the wines are usually slightly more delicate in structure and weight when compared with the wines of Graacher or Wehlener, but they are wonderfully racy and fine examples of the middle Mosel.
-- Estate