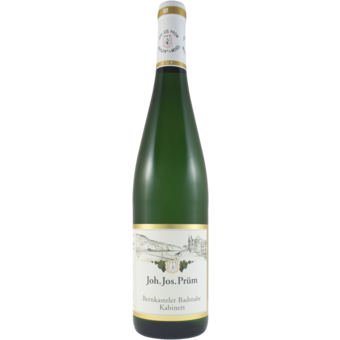 "Joh. Jos. Prüm needs no introduction to Riesling lovers, having already become a Mosel icon during the nearly five decades during which its namesake’s son Sebastien was in cha...

"To the extent that a Badstube has been bottled at any given Prädikat level, it is invariably the first wine shown in any Prüm tasting lineup, thereby reinforcing an impression of these vineyards as bottom of the Prüm pecking order. But just try telling that to this wine (or to me)! An intensely flowery nose suggestive of honeysuckle and decadent lily also exhibits exotic ripeness of banana. Site-typical apple, Bing cherry and cassis join in on the palate for a succulent riot of fruit to accompany still-profuse inner-mouth perfume, while bittersweet, faintly smoky nut oils serve for complex counterpoint. The feel is remarkably creamy and the overall midpalate impression rich, yet the buoyantly sustained finish delivers cut, clarity and refreshment, all in spades, thanks to a generous infusion of fresh apple and lime reinforced by impeccably integrated sweetness."

"Joh. Jos. Prüm needs no introduction to Riesling lovers, having already become a Mosel icon during the nearly five decades during which its namesake’s son Sebastien was in charge. Katharina Prüm has been active alongside her father, Manfred, since early in the new millennium, and the two of them perpetuate a house style that has itself become a Mosel archetype: wines of delicacy and restrained sweetness, often strongly marked in youth by yeasty and otherwise fermentative aromas, and tingling with dissolved CO2. Their longevity is legendary, and the Prüms personally don’t care to drink their own wines – even the Kabinetts – with less than a dozen, and usually many more, years in bottle. The aromas of youthful Prüm wines make it obvious that fermentation here is entirely spontaneous. Manfred makes no secret of his longstanding disinterest in legally dry wines. These are uncompromising, benchmark Mosel wines.

The Bernkasteler Badstube vineyard borders those of the Graacher Himmelreich on the latter’s southern edge. The slopes are on a marginally shallower gradient, with deeper soils than the Graacher and Wehlener, while the western orientation allows the vines longer exposure to the afternoon sun. The Badstube typically produces a wonderfully floral, delicate and mineral wine. Overall, the wines are usually slightly more delicate in structure and weight when compared with the wines of Graacher or Wehlener, but they are wonderfully racy and fine examples of the middle Mosel."
-- Estate