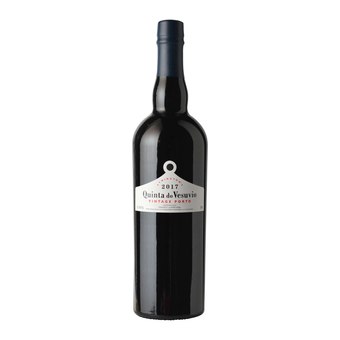 The 2017 Vintage Port is a blend of 33% Touriga Nacional, 35% Touriga Franca, 15% Sousão and 12% Alicante Bouschet, plus miscellaneous others filling out the blend. This was bottled about a month before tasting after 18 months in seasoned vats, but the just-bottled sample was not really ready. This was instead a pre-bottling sample. It comes in with 115 grams of residual sugar. Very fresh, it also has luscious fruit, vivid fruit flavor and big power underneath. It coats the palate and is one of the fleshiest of the wines in the Symington stable this issue, but its best feature is the delightfully juicy finish. It's delicious, long and kind of spectacular. Tight, it also demonstrated the ability to expand in the glass. Then, it showed off the pure power. The combination of lots of fruit, lots of power and endless flavor to go with the endless finish mean that this is a rather stunning follow-up to recent vintages. It is going to need some time. I did (again) like the Capela, its sibling this issue, better—I tend to lean toward structure more than fruitiness—but at half the price, I and other bargain hunters might be content here. Stylistically, this certainly has plenty of virtues of its own, and it will likely be accessible a bit earlier. It will be released in the USA in the third quarter of the year. There were 1,200 cases produced, which makes it easily available too—a nice combination of price, availability and quality as top wines go.

The structure of this wine is dense in tannins that balance the opulent black fruits. The sweeter style of the wine is balanced by the ripeness of the blackberry fruits freshened by the fine acidity. Drink from 2028.