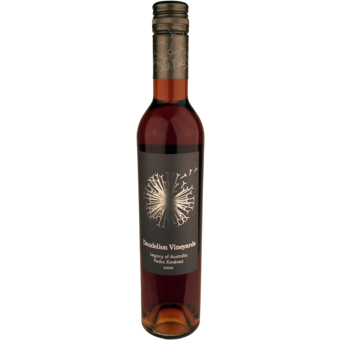 "Our wish is to nurture the unique character of these extremely old (X.O.) Pedro Ximenez wines, to capture them perfectly from barrel. Our Legacy of the Barossa is vigneron and...

"This wine bears little resemblance to those motor-oil-dark, super concentrated, cloying wines from southern Spain. The grape variety is the same, but the NV Legend of Australia Pedro Ximenez xxxo is only medium amber in hue and is remarkably drinkable and complex. Think pecans or walnuts in a light caramel-honey sauce, not too sweet or unctuous, with great acidity that enlivens and prolongs the finish. It's blended to be a 30-year-old in style (hence, xxxo). It's versatile enough to be served as an aperitif or with dessert, but I'd suggest having it on its own at the end of a meal or with the cheese course. I'm consistently impressed by the quality of many Australian fortifieds, and this one is a standout."

"Our wish is to nurture the unique character of these extremely old (X.O.) Pedro Ximenez wines, to capture them perfectly from barrel. Our Legacy of the Barossa is vigneron and lifelong champion of old vines and fortified wines, Carl Lindner. Traditionally grown and vinified, the now rare Pedro Ximenez was first fortified by his family in 1944. This wine is hand blended and bottled without fining or filtration and is best drunk within a week of opening, and we trust with a glass raised to Carl's and his family's foresight." -Winery

If there were ever an offer to jump on, this would be THE ONE. Coming to you directly because you have requested that we contact you with amazing opportunities (like today's). This 95 point rated Dandelion Vineyards 'Legacy of Australia' (formerly labeled Legacy of the Barossa) PX is poured by the glass at one of America's Best Restaurants (Three Star Michelin awarded Alinea in Chicago).

Boasting juice from a solera dating back to 1944, the vines used to make this wine hail from 80-100+ year old vines! Solera owner Carl Lindner pulls from a treasure trove of all the old fortified wines that he purchased from St Hallets, his family's winery, when it was sold in the 90's. The result is today's bottling, Dandelion Vineyards 'Legacy of Australia’ label, which nailed an incredible 95 point review from Gary Walsh of the Wine Front, a wine critic from South Australia that many in the trade liken to the Antonio Galloni of the South. Walsh raved about the wine's mind boggling complexity, "mixed peel, light honey/toffee coated nuts and a cup of black tea to go with it. All manner of sweet and savory flavours on a viscous and slippery base that’s cut with bright acid, so it feels light on its feet." Again, while the finished wine averages 30 years of age, much of the wine dates back to the founding of the solera in 1944.