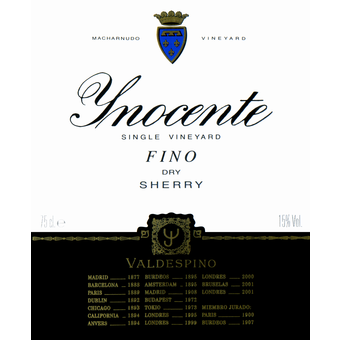 "Yellow straw-colored, medium intensity. Pungent, delicate and complex with almond notes and autolysis. Soft entry on the palate with a round smooth feel and structure; lots of...

"Inocente is one of the only Fino Sherries (and perhaps the only one) that still follows the tradition of fermentation in wood. The slow exposure to oxygen as it ages in barrels increases the wine’s aromatic complexity, the notes fanning out beyond salt and citrus toward herbs and smoke. It feels tense and firm, driven by electric acidity, ready for tapas, like boquerones or fried baitfish."

"The NV Fino Inocente must be one of the few wines in Jerez that is still fermented in 600-liter American oak botas, which is an incredible amount of work compared with fermenting tens of thousands of kilos of grapes (or even more) in a big stainless steel tank. This method was the norm of yesteryear, but is so labor intense that it was discontinued in most wineries, and gives a big diversity of wines, as each barrel has its own character, which contributes to the complexity of the blend. Furthermore, the bottled wine is on average 8 to 10 years old. One other thing that makes it apart from other Finos is that the grapes are exclusively from the high part of the Macharnudo vineyard, so this is a single-vineyard Fino. The nose is very complex, showing the effect of the long lees contact: chalk, dried hay, aromatic herbs and salty almonds. The palate is full, but at the same time elegant and balanced, powerful and fine, with the texture of a Meursault rather than a Puligny. A very complex wine, that manages to be both powerful and elegant. Inocente is great value for money. Drink 2013-2016."

"I’ve often called Valdespino “the Romanee-Conti of Jerez.” Well, there, I’ve said it. To me they represent quality and tradition at the very top of the Sherry hierarchy. The winery, soleras and brands are old, registered in 1875, but with documentation about their commercial and winegrowing activities going back to the 13th century. Their recent history starts in 1999, when Jose Estevez purchases the company from the Valdespino family. Today Valdespino is the jewel in the crown of the Grupo Estevez, which also includes Real Tesoro and La Guita, who stock and age 35,000 botas of Sherry and own 800 hectares of vineyards, 56 of which come from the Pago Macharnudo, on pure white albariza soil, one of the best vineyards in the Marco de Jerez, and 17 hectares from the heart of Macharnudo are still fermented in bota today and form the core of brands like Inocente, Tio Diego, CP or Cardenal. All the wines were carefully and slowly moved to the new facilities of the Grupo Estevez on the outskirts of Jerez, where they continue their development under the supervision of Eduardo Ojeda, technical director, winemaker, who as a wine-lover is very aware of his role preserving these old soleras, wines and traditions."

"Yellow straw-colored, medium intensity. Pungent, delicate and complex with almond notes and autolysis. Soft entry on the palate with a round smooth feel and structure; lots of volume and character as well as a fresh and saline taste." -Importer