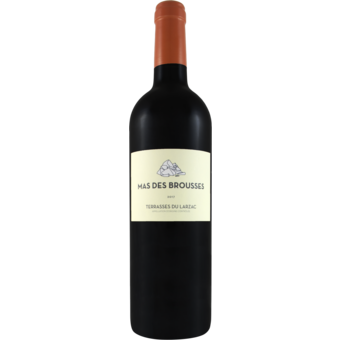 Located in the hills above the fertile Herault river valley, just south of Pic Saint Loup, is the village of Puechabon. Xavier Peyraud, grandson of Lulu and Lucien Peyraud of t...

A blend of 50% Mourvèdre (the cuttings came from Domaine Tempier, in Bandol) and 25% each Grenache and Syrah, all matured in 400-liter barrels, the 2017 Terrasses du Larzac kicks off with scents of resinous herbs and pine, then adds crushed stones, plums and violets. It's medium to full-bodied and silky-textured, with an almost racy spine of acidity that brightens the long finish.
-- JC

Located in the hills above the fertile Herault river valley, just south of Pic Saint Loup, is the village of Puechabon. Xavier Peyraud, grandson of Lulu and Lucien Peyraud of the famed Domaine Tempier in Bandol, together with his wife Géraldine Combes, took over her family vineyards, where they farm nearly 20 acres of vines planted to Grenache, Syrah, Merlot, Cabernet Sauvignon and assorted white varieties. While Géraldine's family had originally intended to sell grapes to the local co-op, Xavier and Géraldine saw the beginnings of their shared dream to establish a domaine of their own, and thus was born Mas des Brousses. Since 1997, the couple have handled every aspect of viticulture and winemaking from vine to bottle. They augmented the hectarage by planting Mourvèdre from Tempier cuttings. Xavier left his family estate in the hands of his cousins, but he couldn't let pass the opportunity to take a few Mourvèdre cuttings with him to the Languedoc! Today, Mourvèdre is a valued component of the Mas des Brousses Terasses du Larzac blend, and it is increasingly important to the culture and identity of the appellation as a whole.

Sourced from parcels on the Terrasses du Larzac above the villages of Puéchabon and Aniane from 15 to 40 year old vines. The Mourvedre is from Domaine Tempier Bandol cuttings. Organically and manually farmed, including green harvesting. All grapes hand harvested, transported in baskets and de-stemmed. Fermentation in tank, daily pump over during the 5 week cuvaison, malolactic at the end of alcoholic fermentation.
-- Importer