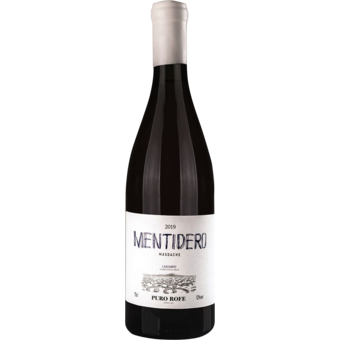 Masdache is named for a small village on the southeastern edge of La Geira in Lanzarote and is sourced from Ascensión Robayna’s vineyard, Moro la Virgen. This site is planted w...

The 2019 Mentidero is a new rosé, or rather a clarete as it mixes red and white grapes—Malvasía Volcánica, Listán Blanco, Listán Negro and Diego (Vijariego)—from the Masdache zone of Lanzarote. All the grapes are planted together, harvested and fermented together, which was the traditional way in the zone. Half of the volume was vinified as a white in 228-liter barriques and the other half as red in stainless steel, and it was blended after six months and kept in stainless steel to settle until bottling. It's a bright and pale pink, but the nose and the palate are completely different from a majority of rosés—this is serious and volcanic, irrespective of the color, with a salty and mineral palate, super serious and long. If you closed your eyes and smelled the wine, you'd think it's a mineral white, close to the Masdache white. 1,650 bottles produced. It was bottled in June 2020.

Masdache is named for a small village on the southeastern edge of La Geira in Lanzarote and is sourced from Ascensión Robayna’s vineyard, Moro la Virgen. This site is planted with 100+-year-old Listán Blanco, Malvasía, Diego and Listán Negro. This vineyard is the source for the Masdache Blanco as well as a small amount of Clarete named Mentidero. Both the red and white varieties are harvested together with have being pressed directly into 228L French oak barrels for fermentation and aging for 6 months, and the other half treated like their Tinto – whole cluster fermentation in amphorae and fermentation bins before aging in tank for 6 months. The two parts are then blended and settle for about a month before bottling.