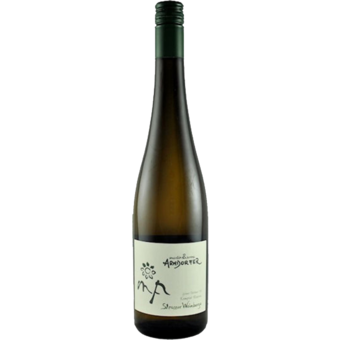 Martin and Anna are the rarest of purists. They are iconoclasts – totally uncompromising in their methods- yet they eschew dogma in favor of open-mindedness and curiosity. Both...

Martin and Anna are the rarest of purists. They are iconoclasts – totally uncompromising in their methods- yet they eschew dogma in favor of open-mindedness and curiosity. Both Martin and Anna come from a long line of winemakers (Anna is from the Steininger family), and their travels before taking over Martin’s family winery were incredibly formative. This, paired with their already strong and creative personalities, caused them to break sharply with tradition when they came back home and forge their own path together. In a short amount of time, Arndorfer has become one of the brightest stars in the natural wine world and an icon of the next generation of Austrian winemakers.

Martin and Anna believe that a profound wine must be a pleasure to drink and a pleasure to make, and it shows in the wines. You can tell that they’re having fun. Their aim is to carry the “message from the vineyard” in its fullest form, and the path is minimalism in the cellar – meaning nothing added and nothing taken away. More specifically, this means no sulfur at crushing, no fining of the must, no adding yeast or even a pied de cuve, no stopping malolactic, no cold stabilization, the very gentlest if any filtering, and no additions beyond minuscule levels of sulfur added at bottling. Especially in Austria, a lot of producers consider this quite risky, but Martin & Anna aren’t concerned by this because they believe their wines develop their own microbial stability through a lack of manipulation.

Strasser Weinberge is a protected name for “village wines“ which show you all characteristics of the variety and the village. Grapes are selected from the best vineyard sides in the village and express the diversity and complexity of the origin. Sourced from 4 different vineyards; Strasser Gaisberg on loess soil with primary rock subsoil, Strasser Wechselberg on heavy dark clay soil with high amount of chalk, Strasser Hasel on deep loess soil, and Strasser Stangl on deep loess soil. They are all south facing terraces with altitudes between 214 - 330 meters planted between 1959 and 2000. Whole punch pressing, no maceration before pressing. Fermented with native yeast and aged for 11 months mainly in large neutral barrels and partly in stainless steel.
-- Importer