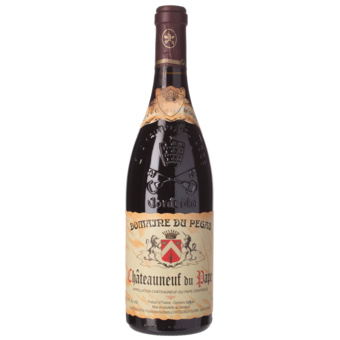 "Domaine du Pegau is an old name in Chateauneuf du Pape. The Feraud family is able to trace their roots all the way back to the middle of the 17th century. That is when the anc...

Now that it has been in bottle a while, the 2015 Chateauneuf du Pape Cuvee Reservee is looking even better than I projected based on last year's prebottling sample. It's all violets, cherries, subtle allspice and clove and traditional garrigue notes of lavender and thyme. Full-bodied and rich, it's crazy complex, adding hints of tar and black olives on the long, silky finish. It should evolve beautifully over the next two decades."

"The 2015 Châteauneuf-Du-Pape Cuvée Réservée is a beautiful, classic wine from the Feraud family that offers powerful notes of blackcurrants, peppered meat, garrigue, and that classic Pégau spice that's hard to find outside of this iconic estate. Possessing a deep ruby/plum color, beautiful complexity, full-bodied richness, and firm tannin, it has closed up slightly since I tasted it from barrel and is going to need 6-12 months of bottle age to bounce back, but this is a concentrated, powerful vintage for this estate that reminds me a slightly improved 2005."

"Domaine du Pegau is an old name in Chateauneuf du Pape. The Feraud family is able to trace their roots all the way back to the middle of the 17th century. That is when the ancestors of the Feraud family first planted grape vines next to their olive trees in Chateauneuf du Pape. The great, grandparents of Laurence Feraud were responsible of growing the vineyard into its current, 21 hectares of vines. Paul Feraud, the father of Laurence brought Domaine Pegau into the modern age when he began to bottle his own wine from the production of a small 5 hectare parcel in Chateauneuf du Pape. Prior to that date, the production was sold to negociants.

The next big step in the development of Pegau took place in 1987, when Laurence joined her father Paul at Domaine du Pegau. At the time, the wine was still be bottled under the name Domaine Feraud. They changed the name to Pegau, which is and old Provencal term for an ancient jug for wine discovered during the excavations of the 14th century, Avignon Popes Palace.

If you've wondered how to say Pegau, the daughter Laurence, who took over managing the property starting with the 2005 vintage, pronounces the name as Pay-Go. The father says it differently, Puh-Gow. That debate makes for a fun dinner conversation.