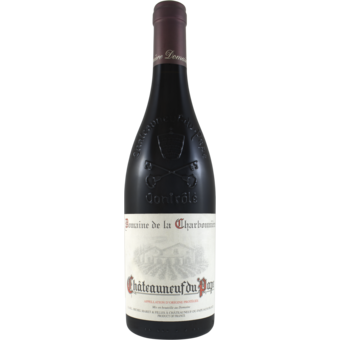 Charbonniere is one of our favorite Southern Rhone estates for value and character. Charbonniere has been family owned and operated since the early 1900s. No matter the hyp...

"Dark and winey, with a big core of cassis, plum eau-de-vie and fig sauce notes carried by sleek, rounded structure. The long finish lets the fruit drip while hints of pastis and violet weave in. Approachable now, but can be cellared mid-term as well. Drink now through 2019. --JM"

"The 2009 Chateauneuf du Pape is a blend of 70% Grenache and the rest equal parts Syrah and Mourvedre, aged in foudres. This wine is one of the darkest of the vintage for Maret, and a classic example of Provencal viticulture. Ground pepper, kirsch liqueur, garrigue, spice box and loamy soil notes jump from the glass of this dense, rich, supple, concentrated Chateauneuf du Pape. It possesses loads of fruit, a lushness that is enormously charming, and an up-front precociousness that suggests drinking over the next 7-10 years.
Michel Maret’s estate of 45+ acres is primarily in the eastern and northern sectors of the appellation, with large holdings in La Crau and the well-known lieu-dit of Brusquieres. His daughters, Caroline and Veronique, seem to be taking over more and more of the responsibilities and add to the remarkable number of women who seem to be in positions of influence and control in Chateauneuf du Pape. There are always four cuvees in the top vintages, but the Marets have added a fifth cuvee, dominated by Mourvedre with the balance Grenache, called L’Envol. This wine is a completely different take on Chateauneuf du Pape, one I am seeing appear more frequently in my tastings. The 2009s all performed better out of bottle than they did last year. These are classic, traditional styles of Chateauneuf du Pape. As insiders know, the finest value from the Maret family is their Vacqueyras made from the 10 acres they own in that appellation."

"A classic Châteauneuf, the 2009 Domaine de la Charbonnière Châteauneuf-du-Pape – a blend of 70% Grenache and the rest equal parts Syrah and Mourvèdre – sports loads of southern Rhône flair with notions of spiced meat, leather, and licorice characteristics giving way to beautifully ripe, pure red and black fruits. Medium to full-bodied, ripe, round, and with a clean, dry finish, this is delicious now, but can also be cellared for 5-8 years."

Charbonniere is one of our favorite Southern Rhone estates for value and character.

Charbonniere has been family owned and operated since the early 1900s. No matter the hype or the press surrounding a wine, the family strives toward the timeless goal of making pure, spirited wines.

These are consistently the best values in the Southern Rhone.