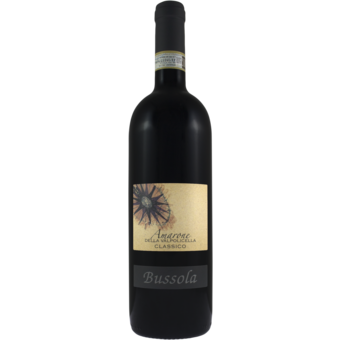 When Veneto legend Giuseppe Quintarelli was asked years ago to name the region’s next superstar, he didn’t hesitate: Tommaso Bussola. Quintarelli’s prediction began to be reali...

"The 2015 Amarone della Valpolicella Classico holds nothing back, with a sweetly spiced and confectionary expression showing cherry cordials, cinnamon sugar and plum sauce. The textures are velvety, flooding the palate with ultra-ripe red fruits; yet for all of its decadence, balance is maintained through juicy acids. A bit of heat pokes through in the finale, as this tapers off with notes of chocolate under an air of lavender and violets."

When Veneto legend Giuseppe Quintarelli was asked years ago to name the region’s next superstar, he didn’t hesitate: Tommaso Bussola. Quintarelli’s prediction began to be realized in 1999, when Tomasso’s 1995’s were released. Among the countless accolades he received, Gambero Rosso gave him the first of many Tre Bicchieris for his majestic Recioto TB.

Originally trained as a stone mason, Tommaso took over over his uncle’s Valpolicella estate—with its prized old vineyards in the heart of the Classico zone—in the mid-1980’s. While vineyard work came naturally to him, he experimented relentlessly, and absorbed information and ideas from every source available. With each passing vintage, his wines came to show more polish, finesse, intensity, and personality. By the late nineties, his style had matured, and his wines had become world-famous for their incredible intensity of fruit. Like other top Veneto winemakers, he uses new barrels, but any hint of new wood is hidden by cascades of lush, opulent fruit.
-- Importer