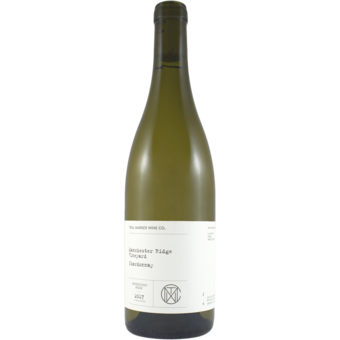 "If a California chardonnay could be Zen about its alcohol, this one may be, delivering a wine that’s plump and structured rather than austere (the abv is 12.7 percent). This has the flavor depth of finely ripened fruit, hinting at nectarine, loquat, yellow roses, gingerroot and white tea. But it’s mainly about coastal air. Drew Huffine harvests it from a vineyard he first got to know in 2007, when he was making wine for other wineries. The vines have a direct view of the Pacific from their sandstone ridge 2,000 feet above the ocean, and their fruit impressed him for its flavor expression at low potential alcohol levels (21 to 22 Brix). In fact, it was the fruit from this vineyard that led him and his wife, Emily, to start Trail Marker in 2012. Huffine says the site was relatively immune to the heat waves of 2017. After he crushed the grapes by foot, he let them macerate for four hours before pressing the juice into neutral French oak barrels, where the wine finished primary fermentation the following May. A delicate chardonnay with the freshness of the Pacific is a rare beast; this one is merely 112 cases. I wish there were more—we need more quiet beauty in California chardonnay."

"The 2017 Chardonnay Manchester Ridge is the most finely cut of the three TrailMarker Chardonnays, but it also has enough depth to play off some of the more citrus, floral and mineral-driven notes that are typical of this site. Bright salinity nicely extends the midpalate and finish, and touches of crushed rock, sage, herb and graphite add closing shades of depth."

"The 2017 Manchester Ridge Vineyard Chardonnay has a nose of sliced yellow apple, cheese rind, lemon, cream and savory notions of dried leaves and honey. The palate is light to medium-bodied, fresh and clean with a good core of savory fruit and juicy acidity, finishing long. 111 cases produced."