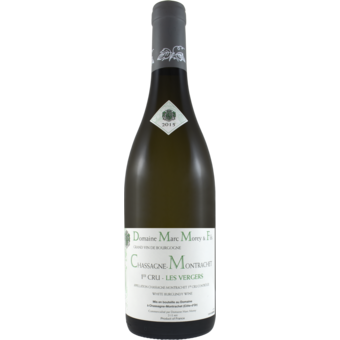 Peach, apple, honey and herb flavors mark this ripe white, showing a garnish of sweet spice. Balanced and easygoing, with a finish tied up neatly with a flourish of citrusy acidity. Drink now through 2023. 540 cases made, 60 cases imported.

The 2015 Chassagne-Montrachet 1er Cru Les Vergers is more expressive than the Chenevottes, a mixture of citrus fruit and waxy aromas, a hint of white chocolate underneath. The palate is fresh on the entry, more taut and linear than the Chenevottes, gently building to a spicy-tinged finish that feels controlled but correct. It does not want to do anything spectacular but that makes this all the better. This comes recommended.

A pretty and appealingly layered nose consists of aromas of various green and white fruit, citrus and a hint of wood. The round, delicious and sappy medium-bodied flavors possess equally good energy and persistence if not quite the same delineation or mid-palate density. Still there is much to like here and this is a wine that should drink well young.

"Domaine Marc Morey was founded just after the first world war by Fernand Morey. The first vineyard holdings comprised just a couple of hectares in Chassagne-Montrachet. Marc Morey took over in 1944 following his father's death, when he quickly expanded the property. He started to bottle directly at the Domaine, and Marc Morey et Fils rapidly became a well respected name in the village. Marc's daughter Marie-Josephine and her husband Bernard joined the family business in 1977. Today, Marc's grand-daughter, Sabine Mollard, is in charge of the estate and has been the winemaker since 2003. The domaine's owns 9.5 hectares of vineyards in the Côte d'Or. Most of their vineyard sites are located in Chassagne-Montrachet. One hectare is planted to Pinot Noir and a small amount of Aligoté, while the majority of their plantings are Chardonnay. Domaine Marc Morey owns over 90% of the Premier Cru, En Virondot. Morey owns 2 hectares of En Virondot will leasing 0.1 from a nieghbor so they are the only producer for this vineyard. Sabine also owns smaller plots in the Bâtard-Montrachet Grand Cru, as well as Premier Cru vines in St. Aubin and Puligny-Montrachet. Sabine practices the principles of lutte raisonée, or sustainable viticulture in all of her vineyards and is a firm believer of the concept that the best wines must start with great grapes. Domaine Marc Morey's cellars are located directly under the century-old family home right in the village of Chassagne-Montrachet. Vinification is flexible according to the vintage, with the wines resting on their lees for on average 10 months for the whites and 15 months for the reds in a maximum of 30% new oak barrels. Sabine prefers that the wines' portrayal of terroir to be as expressive as possible."