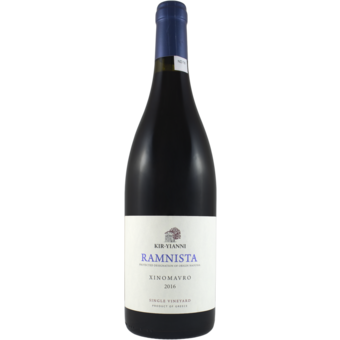 The Kir-Yianni company was founded in 1997 by Yiannis Boutaris. Based in Naoussa and Amyndeon, on both sides of mount Vermion in Northwestern Greece. At the time Yiannis Boutar...

"The 2016 Ramnista, all Xinomavro, was aged for 16 months in 30% new French oak. It comes in at 13.7% alcohol. After tasting a run of rustic Xinomavros that seemed to have endless power and no mid-palates for this issue, this Ramnista changed the channel. This is hardly a bottling that is known for being shy in terms of power, but it has the balance and the mid-palate depth to soak up the power this year. It seems surprisingly fruit forward, although very dry. Granted that both are not here together, this seems fuller in the mid-palate and more fruit-driven than the 2015, for better or for worse. The 2015 might have more energy. Earthy and complex, while still showing good structure, this looks like a fine Ramnista. It might also be a relatively approachable Ramnista. It will still age well."

The Kir-Yianni company was founded in 1997 by Yiannis Boutaris. Based in Naoussa and Amyndeon, on both sides of mount Vermion in Northwestern Greece. At the time Yiannis Boutaris was one of the leading figures in the Greek wine industry, when he left the Boutari Wine Group, the premium family wine company that his grandfather established in 1879. Today, the Kir-Yianni team, under the direction of Stellios Boutaris, son of Yiannis builds on the core pillars of the company’s philosophy: innovation, respect to tradition and specialized knowledge on wine, from the vineyard to the final consumer.

The vineyards used for Ramnista have an overall southeast exposure at an altitude of 280-330 m although it’s sourced from blocks of different mesoclimates with varying exposure, orientation, slope, soil type, rootstock, vine density and age, demanding tailor-made viticultural practices for each vineyard block.
-- Importer