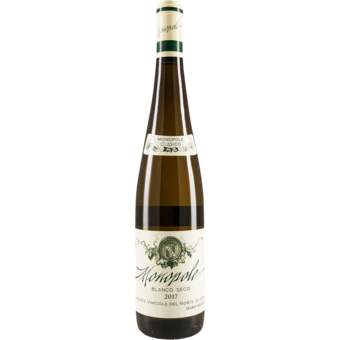 The fourth release of the white that follows the classical recipe is the 2017 Monopole Clásico, a white Rioja with a Jerez spirit, produced with early-picked grapes in the warmer 2017 to preserve aromas and freshness. It fermented in stainless steel and was transferred to used barriques and sherry casks with lees for its élevage for eight months. The unusual thing about this wine is that they added a small portion of Manzanilla, a biologically aged Palomino from Sanlúcar de Barrameda. So, the nose has an unmistakably sherry twist, with a touch of curry and esparto grass, a tendency that, in the unusual 2017, makes the wine a little riper than it was in 2016. It is clearly marked by the process, where the challenge is that the sherry character doesn't mask the Rioja origin or the style of the year. It needs to have acidity, so they picked earlier to avoid the danger of over-ripeness. The palate is tasty, with a very pleasant bitter twist in the finish and the textbook salinity and the chalkiness from both places. Fresh for the vintage. 25,000 bottles produced. It was bottled in August 2019.