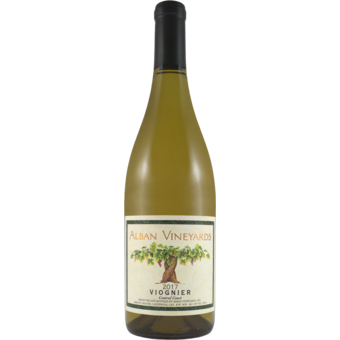 "Our Central Coast bottling is often more than 75% from our own vineyard and showcases the forward heady stone fruit of this variety. It is fermented and aged entirely in stai...

"The larger production Viognier is the 2017 Viognier Central Coast and it’s a serious winner in 2017. Possessing an elegant, medium to full-bodied, ultra-pure profile as well as classic notes of caramelized citrus, white flowers, and hints of orange marmalade, it’s well worth a multi-bottle purchase and will keep for 2-3 years."

"Our Central Coast bottling is often more than 75% from our own vineyard and showcases the forward heady stone fruit of this variety. It is fermented and aged entirely in stainless steel and bottled early.

As hard as it is for me to believe, it has been more than 30 years since I took the sip that launched Alban Vineyards. Some of you may know the story of a bottle of Condrieu that my dear friend Dan Stromberg brought to our mutual birthday celebration while we were both attending viticulture/enology school. At wine school, that sort of thing counts as studying, and we were both very diligent students. Beyond the name on the bottle, I knew nothing about Condrieu- never even heard of it. A year later I was living in that tiny village- the homestead of Viognier, helping with harvest. While it all happened pretty fast, it wasn’t as easy as it sounds.

As the recipient of a French wine studies scholarship, I had the opportunity to go just about anywhere I wished- so long as I worked for free, and didn’t complain (perfect criteria for anyone wishing to start their own winery). Everything was going great until I asked for a ‘post’ in Condrieu. Nobody in Condrieu ‘wanted’ me. Not even for free! The short version is that the region had been in decline for decades and was just beginning to get back on its feet. The handful of growers who remained in the appellation were xenophobic; afraid that I would plant a bunch of Viognier back home and overburden the market. I want to stress that these folks were simply, and understandably scared. They had worked for decades hoping their appellation could re-emerge while teetering on the edge of extinction. While I could empathize, I was feeling a bit of youthful frustration. I argued that it was really in their best interests to help me. Just about no one in the U.S. had heard of Condrieu. The only way to tell the story of Viognier is to tell the story of Condrieu. If my wine caught folks’ attention, the next wine they would try would likely be from Condrieu. This plea resonated for one grower, who upon promise of anonymity, agreed to let me work at his place.

My assertion that sharing information and showcasing Viognier, along with other Rhone varieties, would be beneficial to us all wasn’t just the voice of desperation. This sentiment was, and is, in my soul and prompted me to co-found and promote Hospice du Rhone. In 2005, about 20 years after I pled my way into a job in Condrieu, the producers of that appellation and its neighbor- Cote Rotie, honored me as a Decurion. A sort of citizen for life in recognition of the attention and acclaim I helped bring to the region. It was one of the most humbling and unanticipated moments of my life." -Winery