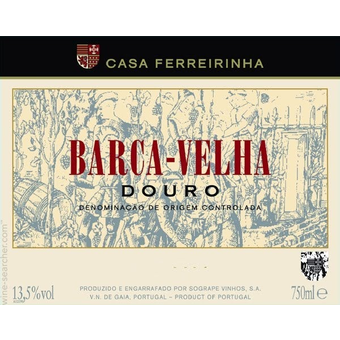 BARCA VELHA IS THE RESULT OF THE PASSION OF FERNANDO NICOLAU DE ALMEIDA, WHO ENVISIONED A HIGH QUALITY DOURO RED WINE MADE WITH THE AGING POTENTIAL OF VINTAGE PORTS. THE FIRST...

Extremely deep red with aromas and flavors that change all the time with blackberry, black raspberry, black licorice, floral and asphalt. Full-bodied with deep intensity, power and finesse. The tannins are wonderfully polished yet so much there. This is a tribute to the first great Barca Velhas of the 1960s. Drinkable, but better in three or four years.

45% Touriga Franca, 35% Touriga Nacional, 10% Tinto Cão, 10% Tinta Roriz. Grapes from the best plots on the Quinta da Leda in the Douro Superior and Quinta do Sairrão. The latter covers 111 ha and sits at 600 m in the Cima Corgo but close to the border with the Douro Superior. Head winemaker Luís Sottomayor describes the 2011 vintage as 'an extraordinary year – one of the best ever in the Douro – intense and exceptional in quality'. A cool and rainy winter replenished water reserves in the soil and sustained the vines through what was a dry growing season. Mild summer temperatures allowed the grapes to undergo slow ripening. Vinified at the Quinta da Leda winery, the grapes were fully destemmed, gently crushed and co-fermented in stainless-steel tanks followed by a lengthy post-fermentation maceration on the skins. Depending on the style of each lot, aged in new wood (60%), some in older oak, over 18 months in the cellar in Vila Nova. The final blend was a barrel selection which was then aged several years in bottle prior to release. In December 2019 Sottomayor decided that this would be a Barca Velha rather than a Reserva Especial. TA 5.4 g/l, RS 0.8 g/l, pH 3.6. 33,000 bottles made. Plus 3,000 magnums which have not yet been released. Very, very dark, black almost to the smudgy black-cherry rim. Marked eucalyptus character on the nose and black-fruited, blackcurrant pastilles. Balsamic and floral, too. Complex, meshed. Big, firm, self-confident but so fresh. Concentrated, deeply structured but remarkably smooth, with layer upon layer of extremely fine tannins. Beautifully fresh and layered. Long, with clearly fabulous ageing potential. As Luís says, ‘a little bit closed’. With air, it becomes more silky and refined on the palate, though it is still a muscular, confident wine.

BARCA VELHA IS THE RESULT OF THE PASSION OF FERNANDO NICOLAU DE ALMEIDA, WHO ENVISIONED A HIGH QUALITY DOURO RED WINE MADE WITH THE AGING POTENTIAL OF VINTAGE PORTS. THE FIRST HARVEST WAS 1952. BARCA VELHA IS ONLY RELEASED IN EXCEPTIONAL YEARS. CURRENT HEAD WINEMAKER LUÍS SOTTOMAYOR BEGAN HIS CAREER AT CASA FERREIRINHA AS AN APPRENTICE LEARNING DIRECTLY FROM FERNANDO NICOLAU DE ALMEIDA. “2011 WAS AN EXTRAORDINARY YEAR — ONE OF THE BEST EVER IN THE DOURO – INTENSE AND EXCEPTIONAL QUALITY.” - LUÍS SOTTOMAYOR, CASA FERREIRINHA HEAD WINEMAKER