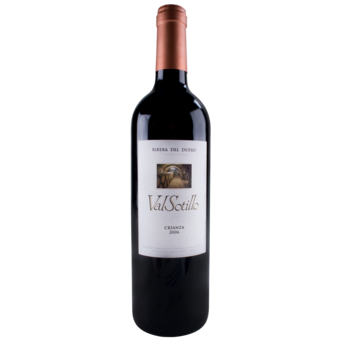 "Vibrant and honest, with expressive raspberry and cherry aromas and flavors accented by mint leaf, liqueur and cassis. Really hits the spot and then fades away in no hurry. A smoking-good crianza that hammers home the fact that Ismael Arroyo's wines are still leaders in RDD. Drink now–2015." 91 Points - Wine Enthusiast

VINEYARDS:
"Ismael Arroyo began the planting of vineyards in Sotillo de la Ribera when other people uprooted them, in those days the people got surprised and said that it was insane what they were doing. The winery owns 25 hectares of vineyards of their own; also we always buy grapes from the same grape growers from Sotillo de la Ribera, who with their good work care for their vineyards in order to pick up a grape of an exceptional quality."

"These vineyards which get to an average age of 50 years (some even up to 90), are planted only with the grape variety 'Tinta del pais' (Tempranillo). The vineyards are planted in well-aired and sunny slopes, in soils with a clay-limestone, sandstone and stony formation."

"The vines develop its growth in a natural way, respecting the environment, without drip irrigation or chemical fertilizers. The pruning is done by hand with scissors; the vines are bought up in the traditional system of pruning in glass, pruning severely the vines. This is the best system of pruning for the vine because this way it does not suffer and the plant tolerates a longer life. These privileged lands and a surprising nature in this area of Burgos offer us an unequalled grape quality." Winemaker

ESTATE:
"Bodegas Ismael Arroyo S.L. is a family winery that is located in a town of Burgos called Sotillo de la Ribera, in the heart of the Denomination of Origin Ribera del Duero. This winery was founded in the year 1979. When there was not yet a denomination of origin. Ismael struggled along with a small number of people in order to create this Denomination of Origin Ribera del Duero, which was created in 1982. The tradition of winemaking has been passed down from generation to generation in the family of Ismael Arroyo for 400 years."

"In fact, the winery preserves a document proving how Elpidio Arroyo, father and paternal grandfather of the current generation, won a prize in 1948 in the "Greater competition of Red Wines and roses of the Ribera del Duero." A glass and 500 pesetas was the award obtained in the year 1951 (1st Award in the Wines County Contest) by Vidal Callejo, maternal grandfather of the current generation. Some other important documents preserved in the cave are a diploma by 1st class wine, granted in the year 1902 and drawn with fountain pen by the engraver Isidro Gil. There is also a document dated in 1787 of the tithe or taxes applied to the wine, which had to be paid to the village, to the church, to the council and to the parish. " -Winery