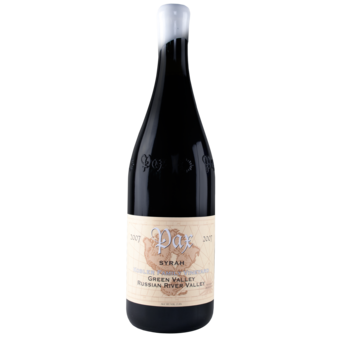 "Awesome. A superior California Syrah, one of the finest of the vintage. Although it's dry, it's massive in blackberry and blueberry pie filling fruit, with interesting complexities of smoked meats, black pepper, minerals from the earth, cola and sandalwood. Just delicious now, and should hold in the bottle over the next six years." 94 points Wine Enthusiast

"The 2007 Syrah Kobler Vineyard is still under the old Pax Cellars label. It continues the exotic, floral, Cote Rotie look-alike style. Sweet tannins as well as lots of floral notes intermixed with black raspberry and black cherry fruit are present in this medium-bodied, delicious, complex effort. Like the other vintages, it represents a singular Syrah."

"This is a fascinating group of wines from extremely cool climate Sonoma sites made by proprietor Joe Donelan and his winemaker, Tyler Thomas. They have produced an exceptionally elegant portfolio of 2009s that is true to the character of this cooler than normal vintage. This winery, which was originally known as Pax Cellars, has always produced remarkable Syrahs and the early vintages are aging fabulously well." 93 points Robert Parker

"Sporting a very northern rhone’esk profile, the 2007 Pax Syrah Kobler Family Vineyard (a blend of 95% Syrah and 5% Viognier made with 100% stem inclusion) possesses a great aromatics of blackberry and cassis fruit intermixed with tapenade, peppered steak and mineral notes. Bright, complex and lifted on the nose, it’s medium to full bodied on the palate with a deep, rich texture, crisp acids and a long finish. This wine sees very little new oak with ~35% being aged in Puncheons (500 L Barrels.)" 91 points - Jeb Dunnuck - Rhone Report

WINE:
"Drawing inspiration from the savory wines of the Cote Rotie in Northern Rhone, the wine is fermented with a high percentage of whole cluster and anywhere between 8-12% Viognier. The Viognier 'lifts' the aromatics, adds a floral element to the wine, and softens the rustic texture of cool climate, whole cluster fermented Syrah. While often lighter in body, this wine broadens and deepens as it sleeps in your cellar and rewards patience better than almost any other wine we produce. The youthful black olive tapenade and white pepper with age add oregano, smoked bacon and lamb, along with black brambly fruit associations. Kobler is a wonderful example of why we produce single vineyard wines: a complete wine with incredible distinction amongst its peers and a superb Russian River wine."

"Located in a sub-appellation of the Russian River Valley known as Green Valley, Kobler Family Vineyard is a wonderful example of how sometimes you must think outside the box to produce wines of distinction. Surrounded by Pinot noir and Chardonnay, the Kobler’s wanted to produce organically grown Syrah in what is considered one of the coolest areas of the Russian River. On a slightly elevated ridge along the eastern boarder of Green Valley, the vineyard slopes gently to the west and its distinguishing climatic influences are cool temperatures, fog, and afternoon breezes."

"Kobler exemplifies a place that cannot simply be gauged by numbers: the high temperatures are often very similar to other parts of the Russian River, so one must look deeper to explain the genesis of such savory aromas and low alcohol not often found in other RRV Syrahs and Russian River wines. Due to the lower lying valley filling up with cool air in the evening, arriving at the high temperature in a given day may occur later, and with early evening cool breezes the high temperatures are quickly tempered relative to other areas. Therefore the hours of warmth the berries experience are diminished and when this kind of small temperature variation is multiplied over an entire season of ripening you begin to have significant influence on physiological development and generate differences from other nearby areas (e.g. Walker Vine Hill) that on the surface have similar weather." -Winery