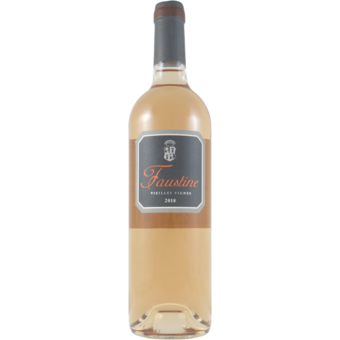 "Get some of this Sciaccarellu in its rosé form while you can. Every year we beg for more from the estate, and they tell us no. Faustine is no mass-production rosé; it’s from p...

"Get some of this Sciaccarellu in its rosé form while you can. Every year we beg for more from the estate, and they tell us no. Faustine is no mass-production rosé; it’s from parcels adapted specifically and exclusively for rosé. The result is steeped in terroir." - Chris Santini

"In the colorful, picturesque city of Ajaccio, capital of Corsica, you can’t get very far without seeing the name Abbatucci. There are streets, monuments and plazas that carry the name, which is normal given that General Jean-Charles Abbatucci from Ajaccio was a hero of the French Revolution and comrade in arms of another local hero, Napoléon Bonaparte. Step into a wine bar or a restaurant there, chances are these days they’ll pour you a glass of Domaine Abbatucci. The domaine is run by Jean-Charles Abbatucci, a direct descendant of the General, who has now become a local hero of another kind—for providing the local populace with its most sought-after libation.

Corsicans are proud defenders of their traditions and environment, and with Abbatucci they indulge guilt-free. His wines are certified biodynamic, and he believes in following even the most far-out biodynamic practices to the letter. On his large estate south of Ajaccio he keeps a pristine poly-culture ecosystem in place, complete with herds of sheep foraging through his vines, groves of olive trees on ancient terraces, and large swaths of untouched forests. His vines come from cuttings of indigenous grapes, sourced decades ago high up in the isolated and mountainous interior of the island from elderly peasant farmers, effectively saving several native varieties from extinction. To keep his vines happy, he’s known to drive his tractor out to his vineyards and play traditional Corsican polyphonic songs over loudspeakers for their benefit. After the harvest he’ll treat his cellar to the same music as his grapes ferment and come of age. All part of the terroir, he says. Does all this have an actual effect on the wine? Have a taste for yourself. The proof just might be in the pudding." - Importer