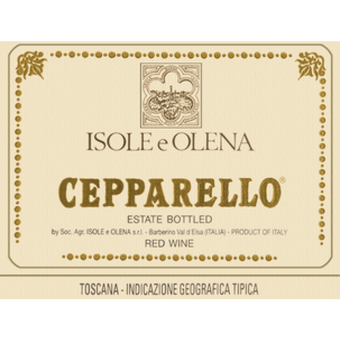 "The 2016 Cepparello is dense, dark and also very closed in on itself. Those qualities bode well for the future, but readers will have to be patient, as the 2016 is going to need at least a few years to come into its own. Black cherry, plum, lavender, spice and new leather gradually open up in the glass, but the 2016 is not ready to show all of its cards. This fruit was brought in during the second week of October, which is pretty much optimal at Isole e Olena. The 2016 spent 20 months in French oak, with a bit less than 30% new oak, and a few months in cask prior to bottling. An explosion of floral and spice notes punctuates the super-refined finish. The 2016 is shaping up to be epic. Don't miss it!"

"The beautiful Isole e Olena 2016 Cepparello is a gorgeous and precise expression of Sangiovese. This is one of the icon wines of the vintage that shows a naked and transparent portrait of the grape on the one hand, with the complexity of the vintage and its territory on the other. Cepparello is like a crystal ball into the heart and soul of Sangiovese, Tuscany's mighty red grape. It is fermented in conical oak casks and later aged 20 months in 95% French and 5% American oak, of which only one-third is new wood. The wine delivers ample structure and contouring, with a firm and silky consistency at its core. Some 42,000 bottles were made. This wine should age over the better part of the next 20 years."