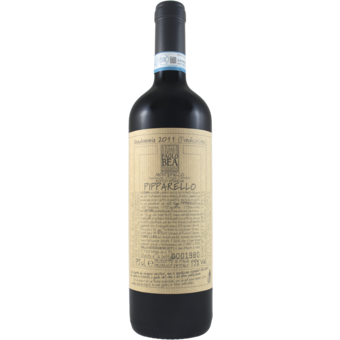 "Comprising 60% Sangiovese, 25% Montepulciano, and 15% Sagrantino, the 2011 “Pipparello” underwent a 56-day maceration, followed by a full four years of elevage—the first two i...

"Comprising 60% Sangiovese, 25% Montepulciano, and 15% Sagrantino, the 2011 “Pipparello” underwent a 56-day maceration, followed by a full four years of elevage—the first two in non-temperature controlled steel, the last two in enormous Slavonian oak casks. Similarly large-scaled as the “San Valentino” above, “Pipparello” is more overwhelmingly brooding, and even more intense in its concentration. The glowering, ultra-savory nose is a thick swamp of camphor, black olives, fresh tar, and sandalwood, with pretty high-toned spices lurking in the background. Like “San Valentino,” its palate is arrestingly dense, yet it carries an incredible amount of energy given its overall disposition—a study in opposing forces that contributes welcome tension. This is a rough-and-tumble, wholly uncompromising wine without a polite bone in its body, yet it still manages to be erudite and nuanced—an embodiment of the spirit of the Bea style at its most extreme.

Since the mid-1980s, the bold, unpolished, yet intellectually stimulating and singular wines from this beautiful family farm in Montefalco, Umbria, have delighted and challenged a steadily growing fan base in the United States. Now, each new series of releases is eagerly anticipated and tightly allocated. Paolo’s son, Giampiero, the restless mastermind behind all of the family’s vinous endeavors, is a true visionary—a man who has consciously been making wines as naturally and ethically responsible as he can, and long before such things were in fashion. (In fact, along with Teobaldo Cappellano in Barolo, Giampiero was one of the founders of the ViniVeri organization, and he remains its president to this day.) Despite having visited Bea scores of times over the many years of our partnership, we always come away from a visit with Giampiero having learned something. It helps that Giampiero himself is always taking on new projects, and he is a man who can spend as much time ruminating on an ancient strain of wheat he is attempting to revive as he can on the weather conditions of the most recent vintage. And the wines spend so long aging before they’re bottled—notice that we are just now releasing the 2011s—that simply tracking each wine during its long evolution is a lesson in itself. Like few growers anywhere in the world, Giampiero combines an experimental streak with an innate trust in nature, and his faith in the quality of his fruit is unshakeable and absolute. Like the greatest wines in the world, his creations are both deeply expressive of terroir and ineffably personal—they could be made nowhere else, but they could also be produced by no one else.

The 2011 vintage in Umbria was a scorcher, with temperatures exceeding 110 degrees Fahrenheit for a brief spell during summer’s apex. Giampiero told us of fruit whose skins had begun slightly to shrivel in the face of such solar intensity, and certainly it was a challenge to combat surmaturite in the vineyards. However, Bea has a history of performing extremely well in hot vintages, as proven by his jaw-dropping 2007s and 2005s, and these 2011s are indeed among the most arresting and lively wines we have experienced in our long history together. Bea is justly lauded for producing the most nuanced, layered, energetic renditions of the thick-skinned, difficult Sagrantino in existence, but his Sangiovese-driven wines in 2011 easily equal the Sagrantinos in power and depth. Furthermore, while folks unfailingly line up for his red wines, don’t forget that Giampiero was one of the earliest growers to revive the ancient practice of employing extended skin macerations for white wines in order to produce them in a more natural and visceral fashion—and the 2011 “Arboreus” is easily the most incredible white wine he has ever produced. The wines below will reach our shores around the 20th of March." -Importer