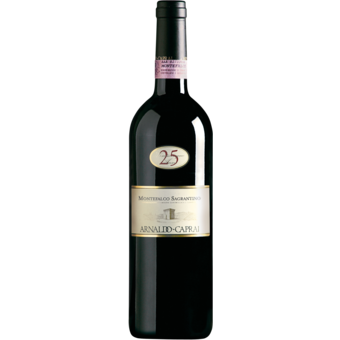 "The family operation began in 1971 when textiles entrepreneur Arnaldo Caprai purchased 12.5 acres in Montefalco. In 1988, ownership passed on to Arnaldo’s son, Marco, who bega...

"The revolution in Sagrantino di Montefalco was led by this outstanding winery with uncompromising standards and a world vision. One of the most, if not the most, elegant of all Sagrantino-based wines, it draws you in with a nose of cedar and graphite, with a hint of vanilla. On the palate the wine exhibits the famous tannic grip of Sagrantino, but with more finesse and ultimately more soft, pleasing fruit than its rivals. This vintage is a classic, and nearly ready to drink now, though another five, ten, fifteen years would hardly be a problem."

Marco Caprai is a person I have come to deeply admire over the years. He can be rough around the edges, but I suppose this trait has served him well. No matter how you slice it, he is a formidable ambassador for Umbria, Sagrantino and, of course, his brand. He is one of the most talented wine promoters and communicators in Italy today. "

"Port-like aromas of plum, cherry and wet earth follow through to a full body with firm, chewy tannins and a savory finish. It has a dusty, salty undertone to it on the finish. Better in 2016 but already gorgeous."

"The family operation began in 1971 when textiles entrepreneur Arnaldo Caprai purchased 12.5 acres in Montefalco. In 1988, ownership passed on to Arnaldo’s son, Marco, who began the project to cultivate the promotion of the grape that has been growing in the Montefalco region for more than 400 years: Sagrantino. Today, the winery is the leading producer of top quality Sagrantino di Montefalco, a wine produced exclusively from this native variety. In addition to its commitment to quality, Arnaldo Caprai is recognized for its dedication to environmental, economic and social sustainability, as well as being champions for the wines of Umbria.

25 Anni is the result of in-depth research and careful clonal selection of Sagrantino’s best grapes. This jubilee wine was produced for the first time in 1993 to celebrate the winery’s 25th anniversary. Since then, 25 Anni has kept its name as well as its unique character, power and elegance.

This rich Sagrantino is a great wine to be paired with roasted or grilled lamb and other meats. Black truffles, game and aged cheeses are also lovely partners to match the tannins and body shown in the bottle. Temperature when served should be between 64-68 F." -Importer