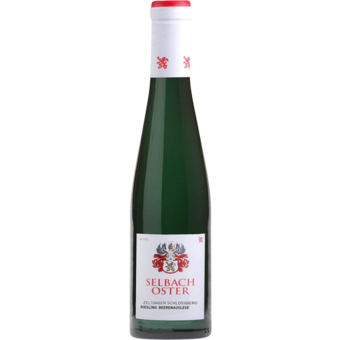 Today, Johannes Selbach and his wife Barbara, with the increasing help of son Sebastian and daughter Hannah, manage their vineyards and winery with passion and respect for the ...

"The 2018 Zeltinger Schlossberg Riesling Beerenauslese is clear and concentrated on the nose that displays tinned tropical fruit, juicy grapefruit aromas and a fine layer of slatey notes. The palate is juicy, fresh, clear, pure and salty, while the finish is frisky and highly digestible. This is a super sexy, very promising, stimulatingly piquant and refreshing BA. Tasted as a sample in May 2019."

"In March, I tasted two vintages at the new and stylish tasting facility of Selbach-Oster between Zeltingen and Ürzig, 2017 and 2018, two very early vintages with very different characters. In 2018, the harvest began on September 3; in 2017, it was only a few days later, around mid-September, so still extremely early. The rain in August and early September 2017 did not create any serious problems, according to Johannes Selbach, but instead caused a very healthy botrytis in late September and early October that enabled the domaine to produce a series of great, highly concentrated but vital and precise noble sweet wines in 2017. Readers should try some of the many great Spätlesen and Auslesen and one or the other of the other higher-predicate wines up to TBA. Not all the Kabinett wines are as stunning as the Zeltinger and the Wehlener Sonnenuhr or the Zeltinger Schlossberg."

"An opening nasal prickle suggesting lime peel, poire distillate and wood smoke seems to reflect the influence both of botrytis and of the site. The glossy palate offers a superb combination of richness and brightness, suggesting vanilla cream, apple jelly and white raisin, but also tangy lime and grapefruit. It’s clear that once berry shriveling proceeded to this point, acids were concentrated along with sugar and dry extract. The prodigious finish exhibits an astonishing layering of confectionary, confitured and fresh-fruited elements haunted by smoke and floral perfume, delivering memorable vibrancy as well as sumptuous richness. (Regrettably, I was not given an opportunity to taste the corresponding Sonnenuhr bottling.)"

Today, Johannes Selbach and his wife Barbara, with the increasing help of son Sebastian and daughter Hannah, manage their vineyards and winery with passion and respect for the estate’s long held traditions. 55% of their 24 hectares of vines are on their original rootstocks, in Zeltinger Himmelreich, Schlossberg, and Sonnenuhr; Wehlener Sonnenuhr; and, Graacher Himmelreich and Domprobst. These vineyards of weathered Devonian slate are on a steep, contiguous slope facing south-south west and represent some of the most prestigious sites in all of the Middle Mosel, in fact 85% of the Selbach’s vines are on steep slopes. The Selbach family’s heritage in the wine business dates to 1660: Selbach’s ancestors shipped wines down the Mosel in their own ships, the wine carried in oak barrels made by cooper Matthias Oster, the great-grandfather on the paternal side of the family. Thus, the winery developed as both a top estate producing some of the region’s best wine, and also as a négociant and brokerage firm, consolidating the production of smaller growers.

The hallmark of the estate are 3 old parcels that Selbach-Oster harvests en-bloc; or, as single pickings, with no selections pulled from the vineyard prior to harvesting. The Rotlay (in the Zeltingen Sonnenuhr, rich in iron ore), the Schmitt (in the Zeltingen Schlossberg), and the Anrecht (in the Zeltingen Himmelreich) are all old parcels high on their respective slopes and post trained on their original rootstock. Typically, Auslese is selected by successive passes through the vineyard—picking fruit for Kabinett and Spätlese first and leaving the healthiest berries on the vine to concentrate. For the en-bloc wines selection of this type is avoided, in order to maintain a holistic flavor profile that contains that of ultra-ripe grapes, optimally ripe, and of lesser-ripe ones which has the ability to reflect a complete terroir of both place and moment. Because his approach in winemaking is minimal, Johannes Selbach will allow his wines to ferment naturally, as slow or as complete as manifest, resulting in dry wines in some vintages and fruity in others.
-- Importer